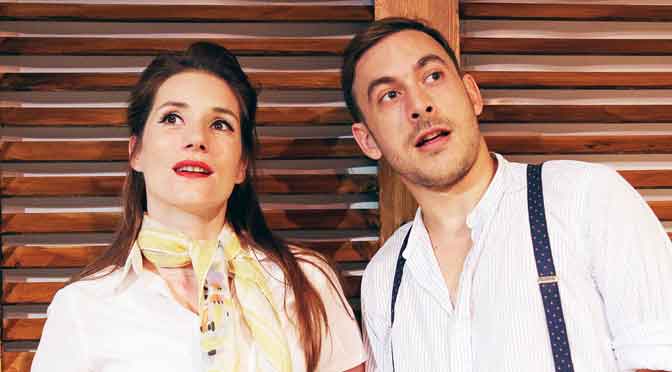 The main protagonist of Peter Nicols’ new play Lingua Franca, at the Finborough theatre, is one of many characters in English fiction to fall in love with Italy. He arrives in 1950s Florence to teach English with a copy of A Room With A View in hand and just as many prejudices as Lucy Honeychurch. Unlike Forster’s heroine, Nichols’ character is not at all likeable. Chris New’s rich performance as Steven leads us through a series of moral compromises, revealing a cynical man with a distasteful superiority complex.

His colleagues at the Berlitz School of English are much more appealing. Rula Lenska is wonderfully cast as the elegant, wise Irena and Abigail McKern adds great comic touches to her part as brisk Aussie Madge. The compassionate Jestin is the real innocent abroad. He has a noble naiveté, performed perfectly by Ian Gelder. The school’s punishing schedule and unimaginative method is endured by them all (they have been through a great deal more in the recent war of course) but it takes its toll on younger members of staff.

Continually repeating the names of cutlery to large groups of teenagers would be enough to drive anyone mad and with a cheeky nod to problems in today’s schools, we know it is not a good idea to have so many knives around – especially with Charlotte Randle’s Peggy on staff. In a fantastic performance, Randle shows her character’s problems by degrees. She is funny and pathetic but also overbearing and manipulative. It is fitting that her love for Steven comes across as more a matter of obsession. Her rival for his affections is the German teacher Heidi (Natalie Walter). This Rhinemaiden (with a cleverly delivered American accent) is a figure of fun although her objectionable politics create an uncomfortable mix.

Michael Gieleta’s direction gives Nichols’ superb characters the space they deserve but also succeeds in several short scenes that could have been confusing. Projections of Florence set the scene and the Finborough has the mixed blessing of being able to convey the sweltering summer heat on stage because the auditorium has no air conditioning.

Nichols’ superb play reveals so much to us – not about la dolce vita Italy but austerity Britain. Steven doesn’t learn about where he is but where he comes from and where he is going – America. Forster’s humanism seems lost on him as the course he decides to study is the lingua franca of power. It is an insightful lesson we should all learn about.

Written 19 July 2010 for The London Magazine