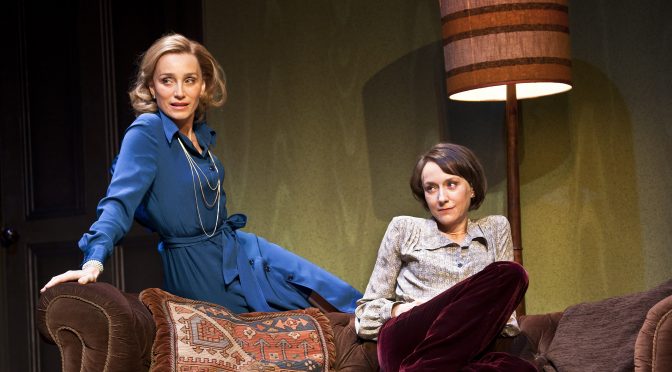 The scenario is straightforward: a woman visits her old, now married, friend after many years. The exposition less so. As the three reminisce, memories become distorted and history manipulated, as they battle for supremacy in their accounts of the past. Old Times is a fascinating exploration of relationships and has a mysterious edge, it keeps the truth about this trio hidden, and as a result this play is as gripping as it is intelligent.

Director Ian Rickson is experienced with Harold Pinter’s work, and it shows. The writer loved triangular relationships, he was a master with them, and this skill is matched in a careful, rich, production. The acting is intense, intentionally affected, with every word and gesture full of potential: the possibility of a laugh or a slap. The dialogue is a constant competition, and the heavyweight cast – Kristin Scott Thomas, Lia Williams and Rufus Sewell – all excel at it. Each manages to traverse the fine line between humour and suspense that is peculiar to Pinter. It’s a surprise to see how much fun they seem to have. Sewell brings an impishness to his role, at times camp, as well as the requisite menace as his character tries to dominate the group. His development into what Pinter described as “a man defeated by women” is a huge achievement. Scott Thomas and Williams bring real charge and their every physical interaction bristles with sexual tension.

A common theory about Old Times is that the two actresses play different sides of the same person, a concept given weight here by Scott Thomas and Williams alternating their roles. But some (or all?) of the characters might be dead, in some kind of Satre-esque Hell, or they might just be plain silly with some peculiar kinks going on. Whatever your idea Old Times is always captivating.

For my money this is a problem play that you aren’t supposed to solve. The wonder of it is in its construction, like the dynamics of the relationships that it explores – it’s enough to see these picked apart and rebuilt over and over. Pinter toys with the audience. The joy of Rickson’s production is to see that game played so well.

Written 4 February 2013 for The London Magazine