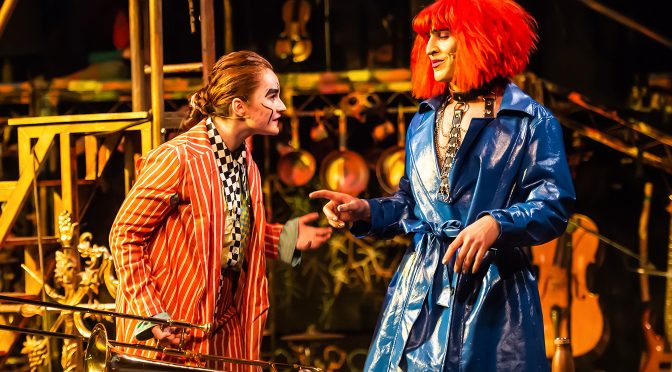 You can see why the Wildcard’s gig-theatre style has its fans. There’s a raw energy to its take on Shakespeare’s Romance that has an anarchic appeal. Director and adapter James Meteyard’s show has lots of ideas, some of them interesting. But there are also lots of problems.

One strength comes with comedy. Shakespeare’s subplot of shipwrecked sailors who join with Caliban to take over the play’s island setting is seldom funny. But with plenty of ad-libs, Eleanor House’s trombone-playing Stephano and Gigi Zahir’s drag queen Trinculo are a lot of fun. Zahir’s “Shutteth the fucketh upeth” is a long way from Shakespeare – but it works. Throwing in a catwalk show is a brilliant twist.

Meanwhile, both the romance and the revenge in The Tempest get lost. Kate Littlewood’s restrained Prospero and Ruby Crepin-Glynne’s savvy Miranda feel like additions rather than central characters. Alexander Bean, so impressive as Caliban, gives a shadowy Duke Alonso. There are too many stumbles from too many of the performers. And of course, when pauses or fumbles start, the atmosphere becomes uncomfortable.

“The isle is full of noises”

The production is notable for boasting Jasmine Morris as its composer. Not so much for the few songs that are included (Meteyard’s lyrics for these are poor) but rather for the soundscape, created with plenty of invention and hugely atmospheric. Yet what should be the show’s triumph also stalls. Whether this is Daniel Balfour’s sound design or technical faults isn’t clear. But the numerous sound effects (which aid Loren O’Dair’s strong performance as Ariel) stop and start abruptly. Audibility is poor.

Meteyard and movement director Jade Hackett work hard to make sure the actor-musicians aren’t stuck with their instruments. There’s a revolving stage and even some aerial acrobatics as well as ambitious lighting from Sherry Coenen to create dynamism. But, yet again, this is uneven. Moments that impress, with a lot of thought behind them, jar with the cast wandering around. The final scenes are far too static.

That the show is too messy for me might be a matter of personal taste. But while only inspired by Shakespeare – with favourite scenes picked out – the truncated approach makes Tempest difficult to follow. The result is a niche affair that shows the original as a piece that needs balance and a play that’s surprisingly easy to wreck.