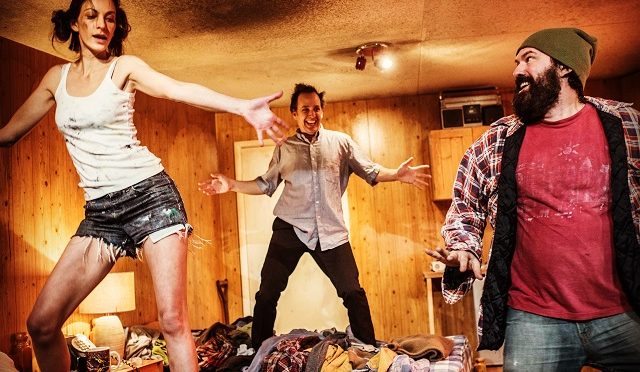 Fried Meat Ridge Road isn’t the kind of place you readily visit and it has taken some desperate house hunting on the part of Mitch, expertly played by Robert Moloney, to end up here. Laid off from his job in a spork factory (they have to be made somewhere) Mitch finds himself alone in Appalachia, with only a degree in Disposable Cutlery Technology to his name and about to become motel roommates with an oddball called JD. Their budding bromance makes for fantastic comedy. JD may be a “bizarre red neck” but he’s a funny one, and assisted by Harry Burton’s sharp direction this short play guarantees long laughs.

A slice of rural Americana, with any audience prejudice cleverly subverted, the neighbours are fun too and cover plenty of comedy bases. Marlene and Tommy are a painter and poet making their lives more complex with drugs and affairs, providing a skilful riff on pretension that performers Melanie Gray and Alex Ferns do well with. The motel’s owner, Flip, is also more than your standard hick. Michael Wade might further explore some of his role’s surprises but, like all the cast, his comic timing is finely tuned. And the more out there the whole thing gets – there’s a dance number, a destroyed gazebo, and a shoot-out with the local sheriff – the better the show becomes. Like JD himself, it’s just the right kind of crazy.

There is a pilot TV show feel to things, but this won’t stop your enjoyment of the jokes – imagine a sitcom with enough well-polished stories to become a treasured box set. What’s really special, however, is playwright Kevin Stevenson’s performance of his lead role. An adorable bear of a man, his charm crosses over into his character, with a naivety that makes JD appealing and thought-provoking. The character’s openness, generosity and vulnerability are all funny, but these qualities are also strengths. JD has some secret help – let’s just say his family history means he’s well connected – leading to a sweet twist that means you leave the show on a divine high. Stevenson’s ability to make sincerity convincing and funny is miraculous.