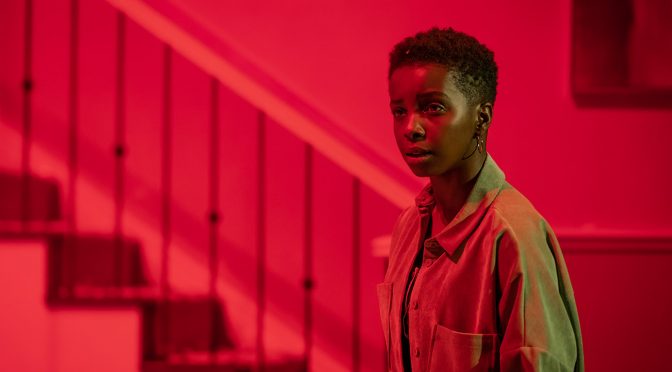 This Pulitzer Prize-winning play by Jackie Sibblies Drury is a challenging piece that explores racism in such a bold manner that it makes for uncomfortable viewing. There’s no doubt that Fairview is startling theatre – its potency and originality are embedded in its very structure. Beware plot spoilers as the action, sturdily directed by Nadia Latif, is deliberately – and brilliantly – disorientating. It’s impossible to forget that its award is American: many of the references are culturally specific and the final fourth-wall-breaking scene may have a different response in the UK. But, sure to prompt plenty of discussion, it will be fascinating to see if a work about cultural divisions can cross the Atlantic divide.

First, we see an African American family dinner, played as a light sit-com that becomes surprisingly tiresome. The scene is then repeated as mime while we hear another set of actors debate race. The later dialogue proves truly excruciating – increasingly so as it becomes clear that they are talking about what we are watching.

Using those theories about the gaze so admired by cultural studies (and turning the tables on an audience) certainly makes the play powerful. The toe-curling talk presumably plays at being even-handed – regardless of the politics of those overheard, they are all pretty awful. So, you might think Drury is a little tough on a well-off liberal? Or that the treatment of an ignorant French speaker is a little silly? Maybe you’ll get nervous about the cultural appropriation of a third talker who later appears as a drag queen? And I’d rather just skip the fourth ‘shock-jock’ style interlocutor. The dialogue, and its interaction with what we see on stage, is often funny but also infuriating.

We have to get back to that drag queen. The voices heard – who turn out to be Caucasian performers – come to the stage as family members. The resulting action is frantic and a sense of chaos not quite controlled by Latif. Fairview is obsessed by performance – from films and dancing to how we behave in front of others – and generates bold questions, notably about the fluidity of identity, that Drury is brave to raise. Writing of such intelligence creates a daunting number of layers to negotiate.

The only caveat is that the play deconstructs so much that the result is bewildering. And a heartfelt finale, led by Donna Banya, where members of the audience identifying as white are asked to go on stage, makes what can come next a daunting question. It becomes hard to know what to take away from Fairview – aside from being hugely impressed. The production is undoubtedly superb: Naana Agyei-Ampadu, Nicola Hughes and Rhashan Stone give brilliant performances. And Fairview is imminently theatrical; it engages with an audience as only live theatre can. I couldn’t argue with the pessimism Drury highlights, but it results in a cold response to the work. With a suspicion that it is not the desired intention, respect (and a touch of confusion) is the best I can muster.