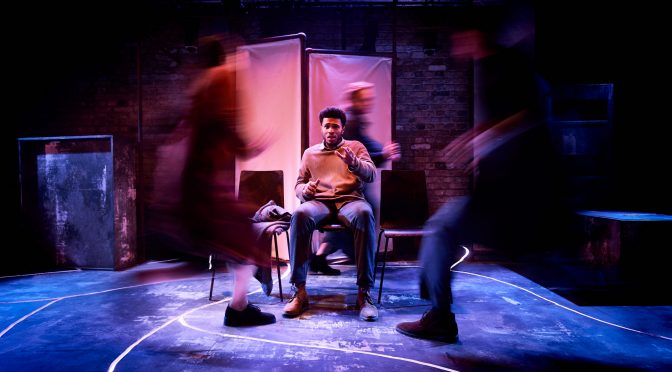 This adaptation of Knut Hamsun’s 1890 novel has clever moves and clear decisions. As we follow its starving character, a student and writer who struggles as a “loser and misfit” in a big city, the direction from Fay Lomas has smart touches. The staging is inventive, the design by Anna Kezia Williams and Rajiv Pattani well used, while tight choreography creates considerable momentum. Pain is effectively portrayed, and highlighting the mental health problems that arise from malnutrition proves enlightening. A case that this tale of a down-and-out could occur any time and any place is obviously the point. Lomas works to show just that – and it’s a job well done.

There’s no doubt the piece serves as a brilliant showcase for a talented quartet of performers. Archie Backhouse, Katie Eldred and Jessica Tomlinson act as the population of a whole town; they cannot fail to impress as you lose count of the ages and accents depicted. They even manage to make a few named characters vivid, despite the brevity of the roles. With the unnamed lead, Hunger makes an exciting vehicle for Kwami Odoom who brings a great presence to the stage and intelligent responses to his task. It’s a thrill for the audience too – there’s a sense of seeing a big talent for the first time and the hope we’ll be able to boast about it one day!

Much of the production’s clarity comes from Amanda Lomas’s adaptation. For a plotless novel that explores psychology through a first-person narrative, her decisions seem sensible, if conservative. Unlike Hamsun, Lomas provides a hero for us to focus on – the play’s lead is far more sympathetic than in the book. The most distressing and controversial scenes are passed over: the character chews on orange peel rather than a bone and his relations with women are made less problematic. We’re given more background, a sense of his age and a more carefully chartered descent into poverty that work well dramatically and serve a broadly political purpose.

Lomas has created a more even experience than that of reading the book. She has an eye on an audience rather than an existential axe to grind. Hamsun was obsessed with pride and religion – both have a small part here as they don’t fit with the programme. And it has to be admitted that there’s a disappointing lack of intensity for a novel famed for just that quality. The character’s ego and his rants against God end up a little lost. Thankfully, it’s possible to argue that the production’s aims are served by toning both down. We’re presented with a story about poverty made universal and powerful by theatre makers with a strong sense of purpose.