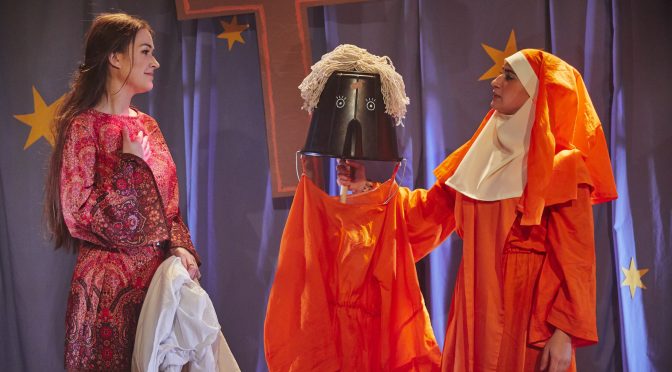 Breach Theatre’s successful new musical comedy is a rude and riotous show that could become a cult classic.

If you love a nun in a musical (and why wouldn’t you?), Joan of Leeds has three of them. Brilliantly decked out in safety-orange habits, that they’re mediaeval nuns adds to the fun. And – even better – it turns out they’re all pretty rude. The dramatic dilemma for our titular heroine, played with a suitably feisty attitude by Bryony Davies, is a struggle with her carnal desires. She’s tempted by saints as well as sinners and tries not to succumb… just not for long.

Joan isn’t just a naughty nun, she’s a lesbian one. With her Sapphic sister, a role that allows Rachel Barnes scope for her excellent singing, there are tender moments, considering this is all-out comedy. And we can leave inspired as the couple prompts a sexual revolution for the 14th century that (with a touch of Ken Russell) might be a bit too much for some people even today.

Add in Joan’s escape from the convent (she’s the original nun on the run) and time as a bored housewife, and there’s plenty going on. Aiding all the action is a great Mother Superior, Joan’s psychiatrist and… the devil: all played with fantastic comic skills, and no inhibitions, by Alex Roberts and Laurie Jamieson.

Meanwhile, Joan’s Bishop turns into the villain of the piece. It’s a great role for Olivia Hirst, whose character tries to narrate, in verse, and control the action with increasing frustration. Hirst uses the Yorkshire accent to especially good effect and gets the most of co-writers Elice Stevens and Billy Barrett’s consistently delicious rhymes.

Joan of Leeds is full of funny touches – keep your eyes peeled. But its success really comes from providing takes on not one but two genres. Based on a believe-it-or-not story, Joan did exist, and the show is an effective spoof on documentary theatre, showing us the story’s manipulation as we watch it. Being presented by the Yorkshire Mystery Players, there’s also a twist on am-dram-goes-wrong. So we get all the usual fun of “professional enthusiasts” not quite coping – handled expertly by the real director, Barrett. Such a firm base makes the show double the fun and smart from start to finish.