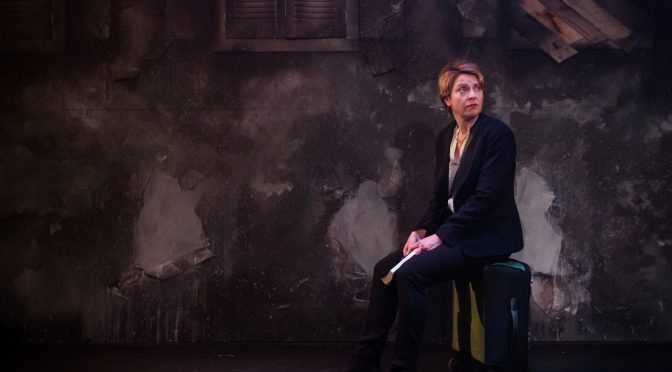 In 90 minutes of theatre that packs a punch, David Byrne brings George Orwell’s titular memoir, about living in poverty in Paris, to the stage with energy and invention. And there’s more. Updating the issues and action, the down and out in London comes from investigative journalist Polly Toynbee’s recent book, Hard Work. The two are interwoven with skill and the rewards are plentiful.

There’s a literary and biographical journey here that proves fascinating in its own right. Headed by an excellent performance from Richard Delaney, who we see develop from Eric Blair into Orwell through his time abroad. The degree of sympathy between Orwell and fellow residents in a flea-bitten hotel, or his exhausted kitchen co-workers, shines through. Karen Ascoe, who plays Toynbee, shares the ability to engender a sense of outrage as both retell the depressing consequences of penury. The writers also share a sense of guilt about their time as ‘tourists’ in the different world that the poor inhabit, with a sincerity that is essential to the success of the show.

A respectful tone is adopted when representing those the writers met, although it seems fair to say that Orwell’s encounters are more richly painted, especially in his friend Boris, a role embraced by Andy McLeod. With imaginative touches, Byrne, who also directs, has three performers (Mike Aherne, Andrew Stafford-Baker and Stella Taylor) flitting seamlessly from the 1920s to the present day, playing both the rich and the poor. The parallels drawn bring home the hopelessness of poverty and how little has changed for those at the bottom of society, making this an appropriately frustrating piece of theatre that everyone should see.