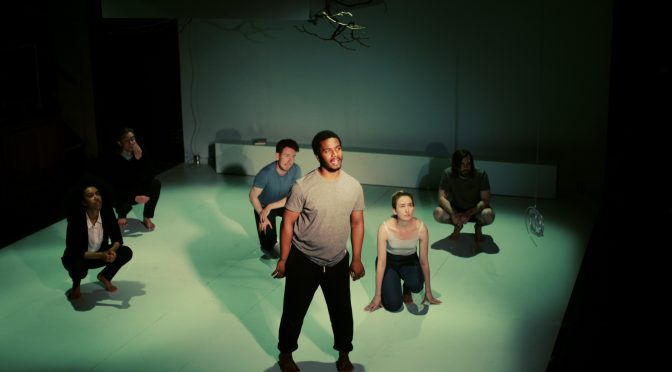 Rene Denfeld is an investigator for death-row prisoners, discovering facts that might save their lives. But her award-winning novel, adapted by Joanne and Connie Treves, is a poetic affair with a magical strain. Bringing such lyricism to the stage is a big task and this attempt is both impressive and intriguing.

Our guide is the prison “monster” Arden, institutionalised his whole life and now awaiting execution. A mute bibliophile, he narrates even his own death, and Corey Montague-Sholay is terrific in the role. His is a captivating performance, with some contrived internal dialogue delivered naturally and a remarkable physicality (including a great catuspadapitham).

Montague-Sholay’s movement, directed by Emily Orme is a nice attempt to express the novel’s flights into both fantasy and despair. But as the director Connie Treves uses it too much; particularly when the whole cast join in for small reason. Likewise, chalk drawing over the set is a good idea, linking the world of legal documentation and the prison cell, but it could be employed with more restraint.

There are fewer reservations with the second major character, known as The Lady, who has the same job as Denfeld. Jade Ogugua tackles emotions sensitively and leads the plot, finding evidence to help a prisoner called York, with suitably intensity. There’s strong supporting work from Liam Harkins as various characters she meets while puzzling over the case’s history. It’s a shame The Lady’s love interest, a defrocked priest, feels tacked on.

I am loathe to criticise the Treves’ work on the adaptation – it is excellent. Having only just finished the novel, let’s go all out and call it exemplary. With a steel will, the tone of calm around the emotive issues raised is preserved. Ruthless in all the right places, the adaptation doesn’t just preserve Denfeld’s themes and style, but enhances them. The characters are more vivid and the action clearer. There might be flaws when it comes to the staging, but this development from page to script is superb.