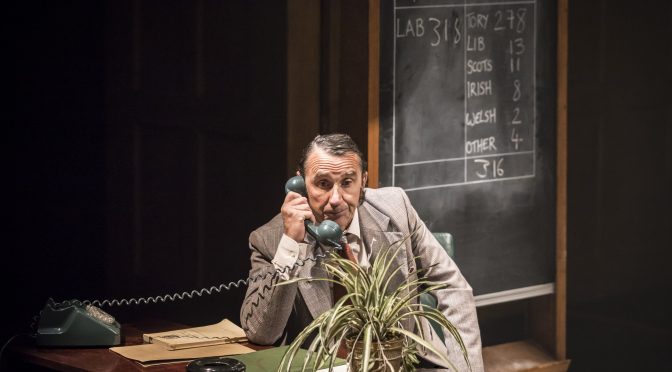 James Graham’s play isn’t your regular political drama. Based on the flailing minority Labour government of the late 1970s, it looks at the mechanics of Parliament – the back-room antics of the whips, who make sure MPs vote. There are few names or issues that people will remember. And, instead of Machiavellian power brokers, the characters are misfit eccentrics, working hard in grubby anterooms. So the play’s transfer from the National Theatre’s Cottesloe, to the larger Olivier, and now, after a long wait, the West End, is a triumph for the young playwright, and his intelligent funny writing, which has warmed the critics’ hearts.

Honours are shared with director Jeremy Herrin, who handles the large cast impeccably. Nearly all the actors play more than one MP, each larger than life, and the sense of a building at work is conveyed with infectious energy. Counting the ‘ayes’ and ‘noes’ becomes nail-biting, while efforts to bribe or cajole coalitions are gripping. Add Rae Smith’s replica House of Commons set, with its onstage seating and bar, and you have a sense of fun that complements Graham’s great jokes.

This House is a brilliantly ambitious ensemble piece. Phil Daniels and Malcolm Sinclair are the chief whips, giving blissfully effortless performances. I probably don’t need to tell you they represent the Labour and Conservative parties, respectively. Praise, too, for Nathaniel Parker and Steffan Rhodri, playing their deputies, each with their own agenda and sombre moments that add humanity to the comedy. Much is made of the differences between the parties, with Labour louts calling their opponents the “aristotwats’, which seems to have struck Graham as particularly fascinating. If some jokes land heavily, relying on hindsight, they are still funny.

The research undertaken for the play is impressive, informative and conveys Parliament’s peculiar charm. Even better, Graham has a good stab at being impartial. How far he succeeds possibly depends on your own voting habits – but the stance of making a play about politics apolitical is dealt with well. That those in charge act like children is a point itself, although Graham is too good to fall for simplicity, showing passion and conviction from MPs of both parties. But the propensity to treat government like a game is clear and used to make brilliant drama.