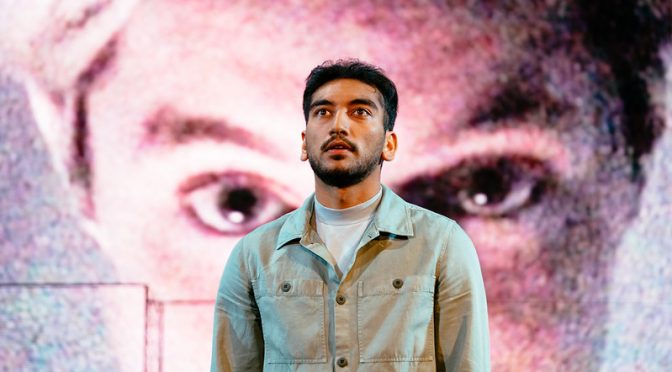 The third and final instalment in Sonia Friedman’s Re:Emerge season is a smart-looking two-hander written by Joseph Charlton. That the West End still seems a long way off from staging bigger shows again (presumably the producer’s plan) is a disappointment. But while the play has problems, despite director Daniel Raggett’s slick production, this stylish piece is a pleasure to watch.

Achingly topical, Charlton imagines a social media shyster who takes New York and a newly rich app developer called Ariel for a ride. Masquerading as a wealthy Russian, the titular character’s Instagram captivates and cons the city with a vague plan to set up an art foundation. Plenty of observation about life online is combined with a touch of romance.

One of the problems for playwrights tackling the subject of the internet is that fiction cannot be as crazy as real life. The results are painfully predictable: the story ends up slim and silly (unbelievable, even though it is loosely based on real life events). An effort to broaden the play, to consider human nature and discuss art, feels grasped at. The latter isn’t explored enough (poor Damien Hirst seems to have a lot to answer for), while Charlton’s bleak view of people is hampered by easy cynicism.

Charlton works hard to make his characters interesting. There’s an awareness that Anna and Ariel will end up driving the play: an effort aided by strong performances from Emma Corrin and Nabhaan Rizwan. These star draws, with awards to their credit and making West End debuts, aren’t quite word perfect. Attempts at taking on secondary characters are hit and miss. But Corrin and Rizwan have a presence that helps with bumpy moments for their roles.

For neither Anna or Ariel are convincing enough. Both arrive at success too easily and, under a veneer of sophistication, are too naive. Any power they hold over people comes close to inexplicable (even Ariel’s talents as a developer seem vague). Charlton’s dialogue is a grating mixture of cliché and jargon – again, it may be accurate, but it ends up dull. And this corporate rubbish is spouted by plenty of other characters who all seem unbelievably stupid.

There is a vague frisson of pleasure at the idea that Anna’s scheme might work – that she can exploit all the “craven” greed we’re told about. But there is too little sympathy or interest for the “lame” (Anna’s description) Ariel – who isn’t a bad guy. Meanwhile, frustration with Anna’s art school profundity and carefully studied eccentricity mounts to make her tiresome, too.

Cleverly taking the play at “warp speed”, Raggett’s direction smooths out many a character flaw and makes a weak plot more exciting to watch than you might expect. The pace of the production adds excitement. The set and video work from Mikaela Liakata and Tal Yarden is excellent: the seamless projections succeed in showing a closed, claustrophobic world of wealth and create a sense of the “playground” Anna works in. It’s a shame that the set, rather than the character, is the star of the show but it at least provides the X factor for this production.