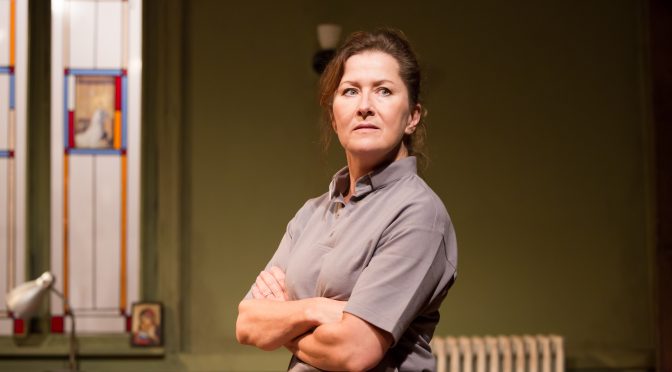 Neil McPherson’s programming consistently brings exciting plays to London, and his venue has another European premiere to boast about. Keith Bunin’s piece has the surprisingly contemporary scenario of a Church minister encouraging a gay relationship for her son. From this starting point, there is a sensitive and intelligent examination of relationships and religion that makes it easy to see why the play was acclaimed off-Broadway.

Kazia Pelka plays Hannah, a scholar and woman of the cloth, who is working on a book about a newly discovered gospel with the help of her assistant, Brandt. The potential for a new perspective on religion enthuses Hannah but is delivered by the play itself rather than any fictional manuscript. Bunin’s key achievement is to make the theological discussion fresh and interesting. The text is aided by Pelka’s calm delivery and the patience of director Paul Higgins – there’s a lot to think about here and we are given time to follow the arguments. It’s interesting and never heavy handed.

The illness of Brandt’s father provides an emotional backdrop for a practical discussion of faith that is impressively clear sighted, while allowing Mateo Oxley to shine with a heart-breaking performance. At the same time, his burgeoning relationship with Hannah’s son, Thomas, is depicted with an understated affection. Here, both Oxley and Michael James create a great sense of chemistry and inculcate our sincere hope that their romance will work out.

Bunin stumbles slightly with this final character of Thomas, whose mental instability proves a distraction. James’s considerable charisma keeps us watching this unappealing twentysomething, but such callow eccentricity is trying. The weaker characterisation is, arguably, a price worth paying for a twist here. It’s this doubting Thomas who turns out to be the intolerant one. Hannah isn’t a saint – their relationship, “twisted in knots”, is depicted with such meticulous detail it becomes painful to watch. But the inflexibility comes from the demands of youth, leading to a fraught denouement that makes the play one of those rare pieces that subtly challenges an audience to change its mind.