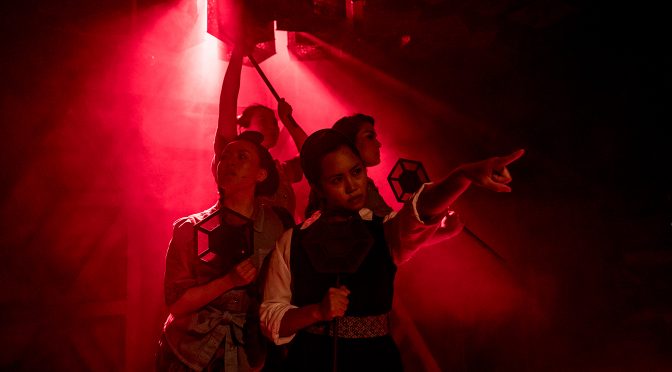 Maryhee Yoon and Cara Baldwin have a strong true story for their new musical. Framed around the trial of Iva Toguri, accused of treason for broadcasting Japanese propaganda during World War II, Tokyo Rose has plenty of potential. Regrettably, the telling of the tale has too many problems.

Maya Britto makes an appealing lead in the title role. Yoon and Baldwin do well with the character and the dilemma of an American stranded in Japan, trying to hold on to her identity. A mixture of naivety and conviction makes Toguri endearing and Britto has a strong voice.

There’s the fascinating idea that, with her prisoner of war colleague Major Cousens, the radio show Toguri presents will subvert propaganda. Humour will be used to fight a war from inside Japan. But the radio show we hear too little of just isn’t funny.

The idea gets lost in a dense biography. The central scenes of the trial are good. But the show’s book (with additional work from William Patrick Harrison, Hannah Benson and Jonathan Man) makes the plot cumbersome. As director, Benson’s efforts to make the show speedy add a nervous energy.

There are more serious issues. Harrison’s music has dramatic moments and drives action well enough. The score is admirably diverse. But too many sentimental songs are a drag. And the music is consistently upstaged by poor lyrics – clumsy and frequently clichéd.

A hard-working cast does its best, although its work as a chorus needs tightening. Performers impress by taking on lots of roles. Lucy Park is a highlight in several male parts: she gets to inject some humour and has a strong scene after America drops the atom bomb. Credit to all for tackling Benson and Amelia Kinu Muus’ ambitious choreography, even if success is mixed.

As a final disappointment, Toguri’s long struggle for justice results in Tokyo Rose wilting. There’s a fiery spirit to the show with the suggestion that America, rather than the unfairly-treated Toguri, should be on trial. But this is abandoned for a bland end. Letters get delivered in a rush and Britto struggles to portray her character ageing. There’s little sense of triumph or achievement for our heroine – or the show.