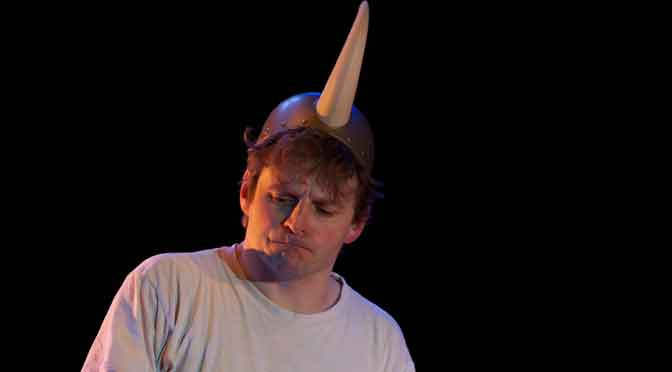 The Summer House is a comedy thriller about a British stag party in Iceland, where three hapless, very modern males, have to face up to a harsh environment and their personal issues. With the lads going slightly mad and getting steadily drunker, the comedy is anarchic. Throw in plenty of Norse mythology and this becomes one crazy evening.

It is the kind of madcap fun that fringe audiences love. Devised by John Wright, who also directs, along with its three energetic performers, Will Adamsdale, Neil Haigh and Matthew Steer, the play is full of invention and laughs, with a tight structure that shows off the performers’ comedic skills. The characterisations are admirable and there’s a nice balance of one-liners and slapstick.

The Summer House contains observations on contemporary masculinity sure to strike a chord. The groom and his best man, Will and Matthew, are successful doctors: as keen on tea as beer, with a grating faux laddishness and a penchant for impersonating WWF wrestlers. Their more laconic companion Neil shares their anxiety but at least he has real problems and these come to provide the play’s suspenseful moments. There isn’t quite enough tension for my liking, which is a shame since the scene in which Will and Matthew work out neither of them really knows Neil is one of the best in the show.

The stag weekend becomes wild but not in the manner expected and certainly not according to the laminated cards created by Will. Contrasting with the trio are Norse Gods, whose story is also told with a nice twist – especially when we see Odin and Thor have problems of their own. The subplot allows all three performers to excel in their numerous roles, providing the funniest Viking warriors and best panic attack you are likely to see on stage.

Written 2 March 2012 for The London Magazine