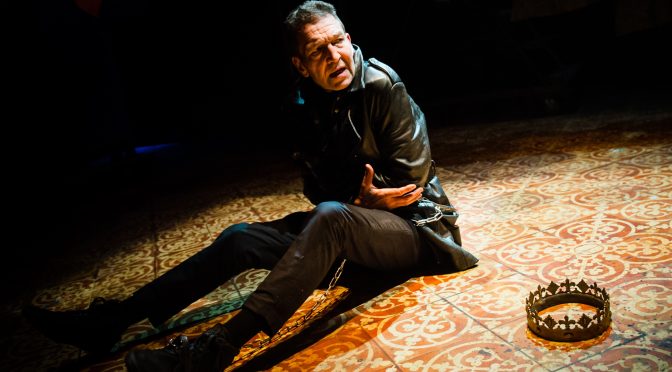 Greg Hicks is dream casting for Shakespeare’s villainous monarch. An experienced RSC actor who commands the stage with just a shrug of his shoulder, he delivers every line impeccably, making director Mehmet Ergen’s production unmissable. This Richard carries a chain to pull himself upright but it could clearly be used as a weapon. He’s nasty and thuggish, a bar room brawler not to mess with – there’s no nonsense here about the character’s charisma. Hicks shows the world through a psychopath’s eyes rather than presenting us with a cunning politician, and using the king’s cold logic to create a chilling persuasiveness that leaves you gasping.

A mature cast join Hicks, securing further praise for the production. Peter Guinness is particularly strong as Richard’s partner in crime Buckingham. This is where the politicking comes, with a cloak-and-dagger feel aided by noirish staging, with Ergen using Anthony Lamble’s split-level set boldly. The big news is a superb Catesby, the sinister instigator of Richard’s plans, with Matthew Sim making an elegant assassin out of a usually minor role with super-spooky meticulous gestures. Strong female characters are another reason to love the play: Jane Bertish is an excellent deposed Margaret, her curses on the “bottled spider” Richard containing a sense of the tragedy that motivates her. Sara Powell gives an emotional portrayal of Queen Elizabeth that also impresses.

It’s a grown-up affair all around. Ergen is comfortable with his audience managing to work out contemporary resonances in the play if they wish, but there’s no sense of this being forced on us. Of course, the play isn’t performed in doublet and hose, but there’s no obvious spin or agenda, and this, ironically, feels original. Ergen even credits us with knowledge about the play’s propaganda content. Jamie de Courcey’s Richmond has a dash of the heroic that would have made the Tudors proud. Winning against the tyrant “raised in blood” gives the play a resolution worth suspending cynicism for. A final intelligent touch – one of many – in a strong production with consistently fine acting.