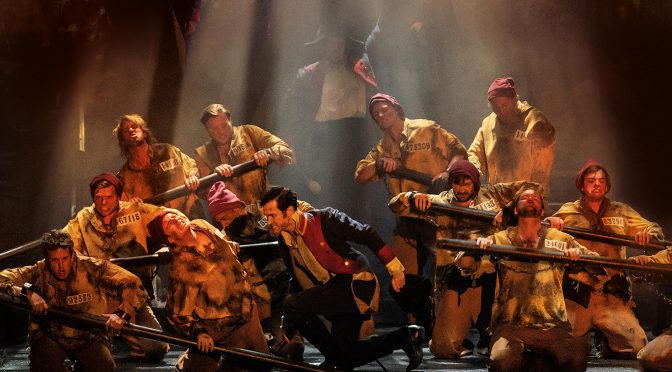 ‘If it ain’t broke don’t fix it’ is not the maxim of Cameron Mackintosh. Despite enormous success, the RSC’s production of Alain Boublil and Claude-Michel Schönberg’s musical has been restaged. Previously a touring version, the ‘new’ show comes from former cast members and now directors Laurence Connor and James Powell. It’s obvious how well they know the piece. And don’t worry – Les Mis is as wonderful as ever.

If a little upstaged by the fantastic concert version of the show, which filled in after lockdown, Connor and Powell have clear ideas. I won’t be drawn into saying if the result is better or worse, but there’s no reasons Trevor Nunn’s previous version should be considered definitive. If the new version seems more static, maybe more traditional, it’s still a crowd pleaser.

The moral struggle between convict turned religious convert Jean Valjean and police inspector Javert, a very literal embodiment of law and order, is focused to the point of perfection. There are social issues, romance and, of course, revolution. The marvel of Nunn and John Caird’s adaptation is not just that all of this is easily followed by an audience, but that it enthrals.

There is a rawness to some of the vocals that might raise eyebrows. Squeezing out all possible drama – and the show is melodramatic anyway – is prioritised by Connor and Powell. Bradley Jaden’s Javert is a charismatic figure, fraught with angst. If the role is overshadowed by Valjean, that’s down to Jon Robyns’ star presence. Both male leads give terrific performances.

The comedy is particularly strong, mostly due to the always excellent Josefina Gabrielle and Gerard Carey as the dastardly Thénardier couple. And there’s a superb Enjolras (leader of the 1832 revolt the show documents): Jordan Shaw brings a beauty to the singing of this role that I hadn’t appreciated before.

Connor and Powell have clearly inspired their cast. And credit where it is due, plenty has been learned from Nunn: the staging isn’t fussy, several scenes are powerful because of their simplicity. There is justified confidence in On My Own(and a great performance from Sha Dessi). It’s a shame Empty Chairs at Empty Tables has less impact; I just can’t imagine how that could have been improved.

Talking about the revolution

The redesign comes from Matt Kinley, also long associated with the show. The big news is that the famous revolving stage is gone! The world hasn’t stopped turning as a result, but I did miss it: there’s a little too much marching on a spot. The action, you might say energy, is literally more frontal – with characters facing the audience almost obsessively.

It’s clear where money has been spent. Javert’s final scene does look better. And the projections of Parisian sewers are more technically advanced. Yet backdrops (inspired by Victor Hugo’s paintings) impress mostly because of their size. It’s all part of the production being a little, well, flatter. That isn’t always a bad thing: the show also seems speedier.

Nunn was no stranger to a tableau, but the new production feels frozen at times – almost too eager to focus on key moments that are literally in the spotlight. Lighting designer Paule Constable has done lovely work that’s dramatic and directs attention. But occasionally there is a halting feeling to the show. It’s as if everyone is posing for a photo.

These are observations rather than criticism. You are sure to enjoy Les Misérables as much as ever – the music and the performances are marvellous. Debating if the production is tighter and more direct or maybe a little less exciting is now part of the fun. If I’m not sure anything really needed fixing, this new Les Mis is far from broken