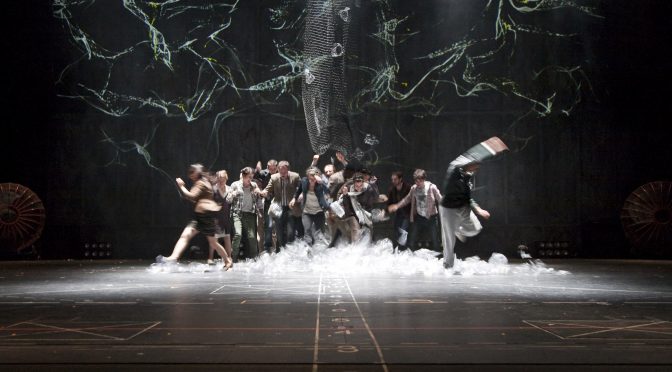 Over population is just one of the huge problems facing the natural world. It’s an irony that the National Theatre’s new play about the environment, Greenland, suffers from a similar issue. With four writers having contributed, the play is a disaster in itself.

Moira Buffini, Matt Charman, Penelope Skinner and Jack Thorne have all attempted to address the issue of climate change. The idea of making Greenland a collaborative event is ambitious, and I guess all aimed at inspiring a Big Conversation reflected in a series of after show events. The writer’s stories are supposedly interwoven to scope out the effects of climate change and how we react to the threat. Unfortunately the stories don’t so much interweave as unravel. Even worse, none of them is that interesting.

The future, it seems, is not just bleak, but boring. Director Bijan Sheibani paces his production far too quickly. Maybe sleight of hand started to look like a good idea during rehearsals, but the problems of this script aren’t going to disappear just because you race through it. There’s quite a bag of tricks on display: wind machines, a rain curtain, and plenty of things dropping dramatically on to the stage. The National Theatre’s always excellent production department is to be praised, but for hard work rather than results.

Nobody doubts the environment is an urgent issue but there’s always the danger that you are talking to the converted. One of Greenland‘s faults is to not just preach to the choir but to shout at it. And shout in a rather unpleasant tone. It feels as if the National Theatre’s audience is to blame for the world’s woes with its greed (mostly for coffee) and its ignorance (particular concerning the capital of Mali). Even worse, Greenland is remarkably uninformative. You will learn nothing new here and that is shocking omission.

A large cast wonder haplessly around the stage and can do little to save things. Only Amanda Lawrence gives a stand-out performance and manages to bring some humour and warmth to proceedings. And it’s good to see some young talent on the stage, Isabella Laughland and Sam Swann deal ably with their roles as young activists and it’s a shame they don’t have more to do.

There is little hope in Greenland. The aimed-for humour points a finger at activists and the complacent but only hits home ironically – “this eco stuff is making you unhappy,” says an exasperated mother to her campaigning daughter. We know just how she feels. The prevailing feeling is one of anger, justified but hardly constructive. The preaching tone taken might make you angry, too. But, sadly, for the wrong reasons.

Written 3 February 2011 for The London Magazine