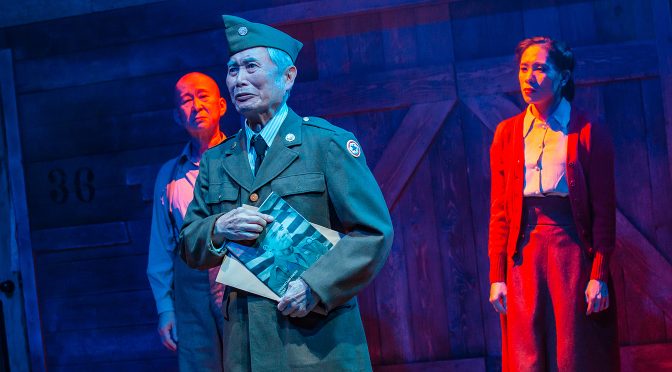 The legendary George Takei is the star behind this musical and, like many of the cast, he is well worth seeing. The show is inspired by his early life – interned by the US government after Pearl Harbour – and has an important message. The history is interesting but, good intentions aside, attempts to be inspirational are effortful.

The book, by Marc Acito, Jay Kuo and Lorenzo Thione, is efficient. The family dynamics are depicted well, with three generations of men making good roles for Takei, Masashi Fujimoto and Telly Leung. And there’s an impressive part for Aynrand Ferrer as the only woman in the family. The story is good. The politics is well handled, too, focusing on the oath of allegiance Japanese Americans were asked to swear. The rifts this caused in their community are presented with clarity and passion.

There’s a big ‘but’, though. Those efforts to inspire are hard work. Kuo’s music could be bolder and his lyrics really plod. There’s a sense that most of the words sung are capitalised, and repetition is presented as if it were an argument. It’s a matter of diminishing returns; lighter moments with perkier numbers and a sweet, if doomed, romance (Megan Gardiner does well here) adding much needed humour are better. A couple of satirical numbers are highlights and give Patrick Munday and Iverson Yabut a chance in the spotlight. But Allegiance wants to be serious, as its subject is, and it wants this very badly. Sentimentality overpowers the dilemma and the show’s sincerity becomes a liability.

The show is saved by a good production and strong performances. Tara Overfield Wilkinson’s direction and choreography are nimble, while the action is swift and, again, clear. There are plenty of neat touches to movement and Nic Farman’s lighting design is well used. Speed goes some way to distract from earnest moments, but the score insists on big numbers and Wilkinson has to give them time.

There are no quibbles about the lead actors. We know that 85-year-old Takei has charm – it’s a pleasure to see him on stage – but he also brings a good deal of emotion to his final scene. If the concluding offering of hope seems brief, considering the trauma on stage, there are further fine performances to enjoy. The leads, Leung and Ferrer, breathe life into sluggish lines with great skill. Both are superb, brimming with confidence and sounding great.