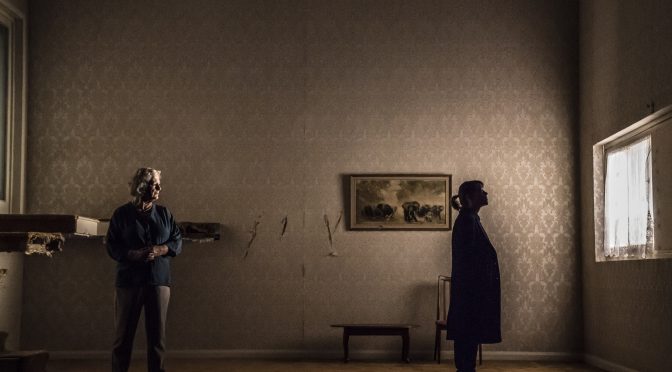 Mark Ravenhill’s new play uses education to examine politics between the generations and the sexes. Cultural pressure points, easily recognised, signal an author with his finger on the pulse, while intelligence and care call out hypocrisy on either side of a divide between ages and genders. The simple scenario has a teacher, about to retire, literally under siege by a violent mob of school children who discover that, once upon a time, he executed corporal punishment.

Fairy tales play a part; the language of the play is often comedically plain, reactions to extremes deadpan, and there’s reference to a witch or two. It seems that Edward, a dedicated Deputy Head, and his wife Maureen, are living in a never-never land, full of nonsensical nostalgia that the Daily Mail would be proud to print and everyone else can enjoy mocking. Those millennial snowflakes are a target of course – so far too predictable – with Alun Armstrong and Maggie Stead doing a wonderful job of making outrage believable. Thankfully, Ravenhill knows it’s essential to present another side to the story.

The presence of the couple’s daughter, Anna, estranged as a traitor since she works for an Academy school, shows the play’s strengths. Ravenhill has created a challenging character and Nicola Walker gives a superb performance in the role. She knows what “best practice” consists of,  yet doesn’t believe any of the jargon she is fluent in and her motives prove dark. Anna’s background, her childhood with this odd couple, leads to some extravagances on Ravenhill’s part. Walker juggles the anger her character has inherited with a façade of calm that is captivating.

Vicky Featherstone’s direction suits the play perfectly. But waiting for the headmaster, who has been scared away by scandal, and a trip into the attic, don’t really cut it dramatically. Efforts are made to inject tension, Chloe Lamford’s design tries especially hard, still it’s hard to believe a lot of what little action there is here. Credibility isn’t the point of course, but its lack can prove frustrating; a block to the admirable detail on offer when it comes Edward’s sexism or Anna’s vengefulness. The Cane works better as a set of ideas than it does as a play, but these are clever arguments, well presented and expertly performed.