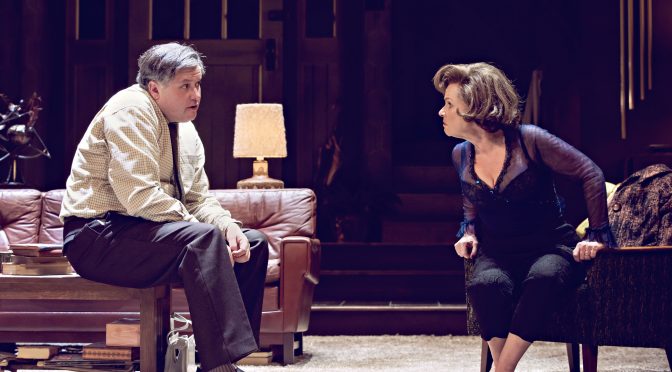 Casting doesn’t get more exciting than this. For the first revival of Edward Albee’s masterpiece since his death last year, Imelda Staunton and Conleth Hill take on the iconic roles of George and Martha, the feuding couple whose frustrated lives on a New England college campus are full of twisted alcohol-fuelled fantasies. Imogen Poots and Luke Treadaway, as the younger Honey and Nick, join them for a party – unfortunates drawn into troubled lives for a fight night they will never forget. The stage brims over with talent for this astounding play.

George and Martha’s “exercise” of combat is frightening. Their aim at one another is practised and potent, themed on his stagnant career and her drinking and adultery. Their “games” escalate ferociously – and they start out pretty vicious. Staunton and Hill convey the complicity between the couple perfectly, who display a mix of resignation and excitement over their perverse sport. The final scene, revealing who is really the most damaged, shows how carefully constructed both performances have been. Yet it is the younger cast who offer the most insight into the play. The 1966 film shows how easily these roles can be eclipsed, but Honey and Nick are more than sacrificial pawns. Potts and Treadaway work to create a convincing relationship, a foil to their elders. Potts does a great drunk (never to be underestimated) and Treadaway adds an edge to his “smug” character with cold ambition and repressed physicality.

Yet the production is not an unqualified success. It’s too funny. Yes, Albee’s text is full of wit but here the humour is blunted and misogyny unquestioned. Director James Macdonald hasn’t mistakenly stumbled into his approach and clearly gets what he wants – big belly laughs. But it is a disappointment. Take a moment of physical violence (noting how rare and strange it is) and Honey’s reaction to it: Potts gets a roar of laughter but this should be a moment of raw bestiality. Macdonald has stripped the play of surreal touches, such as George’s ironic obsession with order. Deliberate mistakes, over job titles, locations and dates, are treated glibly when they should be unsettling. Too much of the comedy is treated as sparkling and fresh – it should be fetid and uncomfortable. George and Martha’s “flagellation” is sordid stuff, but here it feels like a drawing room comedy.