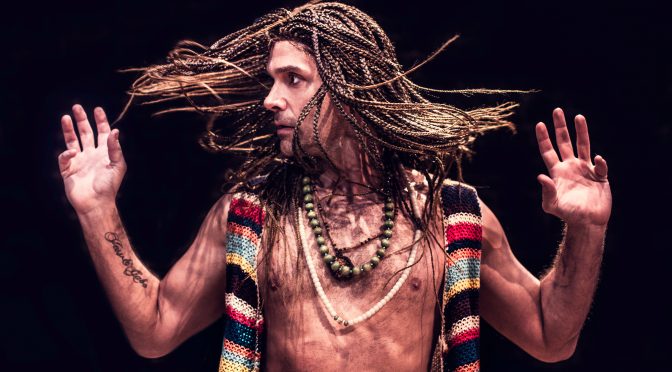 If there was ever a time ripe for lampooning, we’re living through it now. So thanks to Patrick Marmion for having a go with his new play. The effort isn’t an unquestionable success but there are some good jokes in this tale of a Dionysus of our day. As the god points out our problems, there’s satire and a touch of farce. You should laugh, even if it’s all too predictable to really lose yourself in.

The trouble is, if you set out to write a play that toyed with being risqué, it would probably end up like this one. There’s a startup millionaire turned hippy, his radical feminist ex-wife in trouble for transphobia and their entitled snowflake daughter who brings back a Muslim fiancé from her voluntary work. All pretty easy targets. There’s plenty of potential, of course – especially when it’s staged in North London – and some good lines. But you do know what’s coming next. And the characters are too flat even for caricatures.

Marmion’s self-consciously clever move is to subtitle the work ‘Moliere Rewired’. He says he has eviscerated the French writer although, if anything, the Puckish lead and sub plot with twins make the inspiration more Shakespearean. Still, there’s a fine Tartuffe type in our titular hero, a god disguised as a South African gun runner turned Buddhist monk. And Joseph Millson gives a strong performance in the lead: he has the charisma to give the role depth, the presence to make the incredible work and the confidence to give the jokes time to build.

Millson adds a conviction that the show lacks overall. Director Oscar Pearce rushes through the work as if speed might guarantee humour. The racing delivery, of Sara Powell and Natalie Klamar especially, is impressive but the jokes need more room. Pearce is more hampered by the script’s other shortcoming – it’s very static, more of a radio play than anything, with only one visual gag (well done to Aki Omoshaybi here). The dance at the end is a good idea.

Along with a checklist for crazy characters, Marmion’s strategy of trying to offend everyone equally is a tried and tested one. Regardless of age, gender or religion you’ll probably find a joke at your expense and I suppose that the Brazilian cleaner with a dust allergy (a nice turn from Lizzie Winkler) might cover class, too. Making light of weighty issues can be useful and I doubt Marmion would revel in really offending anyone – there’s no malice in the piece and, as it becomes sillier and funnier, there are glimpses of charm. It’s just a shame that Keith? is too calculated to really win you over and never crazy enough to really make you think anew.