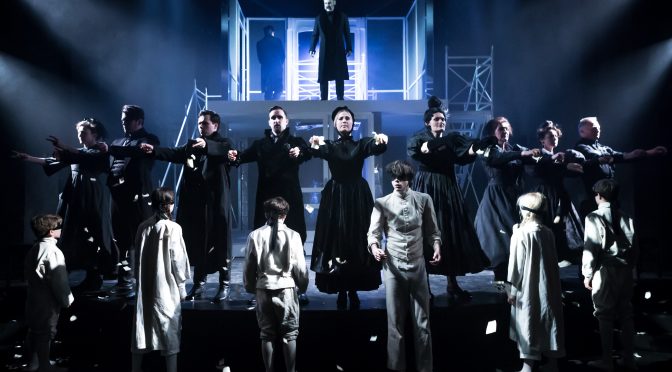 This new French musical’s world premiere benefits from the talents of director Thom Southerland. It’s the story of Louis Braille, who battles against prejudice to improve lives with his invention of a reading and writing system for the blind. The aim is to inspire and, with a rousing, diligent score, here’s a chance it’ll induce goose bumps and maybe a tear or two.

Now, while Braille changed the world for the better, he did so from behind a desk, his “silent revolution” being slow rather than dramatic. So it’s quite a task for Sébastian Lancrenon’s book to animate Braille’s story for the stage and the results are unsteady.

The first good idea is to show Louis as a rebellious teenager, affording Jack Wolfe in the lead role enough to work with to ensure that this makes a strong professional debut for him. Wolfe’s singing is great and he clearly has a promising future.

But the awful discrimination faced by the blind in the 19th century isn’t established well. The banning of Braille’s system shows the shocking extent of inequity and could have been given greater impact, while a dramatic subplot (about children being used in fatal experiments to “cure” blindness) should have been introduced much earlier. The battle of wills at Louis’ school for the blind becomes deadly serious: and only then can both Jérôme Pradon and Ashley Stillburn, as rival pedagogues, really show their mettle.

Further efforts to enliven the story are similarly flawed. Humour is thin, despite the efforts of Kate Milner-Evans as the wife of Captain Barbier, whose “night writing” formed the basis of Braille’s work. Themes of family and friendship, leading to emotional songs for Ceili O’Connor and Jason Broderick, are powerfully delivered, but hampered by woefully under-inspiring lyrics, translated by Ranjit Bolt.

With this uneven mix, Southerland’s skills come to the fore. He clearly believes the show deserves a large stage and a big sound. Knowing that sentimentality is the strongest element in the show, the director doesn’t shy away from it. And he is a persuasive man.

Tim Shortall’s revolving set literally adds the motion needed. The singing is flawless, the whole cast showing an impeccable delivery that makes a lot of a competent score by Jean-Baptiste Sauray. Taking just one detail, the use of blindfolds discarded when blind characters can “see” (if dreaming or using Braille), shows the impressive creativity on offer – a saving grace for a show struggling with some big problems.