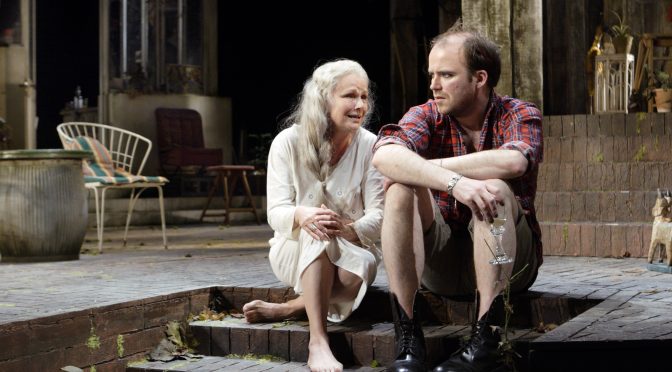 What a cast: making a return to the stage after over a decade, national treasure Julie Walters is joined at the National Theatre by the equally superb Helen McCrory and Rory Kinnear. You might think their presence in any play should be enough, but even these performers can’t hide the problems in new playwright Stephen Beresford’s debut, The Last of the Haussmans.

The story of an old hippy, Judy – played by Walters with great energy – and her discontented family, starts well: it’s a gentle comedy, with Chekhovian spirit and naughtiness on the right side of rude. Kinnear is captivating and McCrory wonderfully deadpan, while her long-suffering daughter, played by Isabella Laughland, does remarkably well to hold her own against the more experienced thespians.

But after the interval Beresford’s attempts to add a serious edge fall flat. It seems we have another play about the baby boomer generation, and the disgruntled offspring’s desperation for property, but this now familiar theme feels tacked on and unconvincing. There is little exploration of what Judy’s politics were – surely more than just something to laugh at – and the sheer self-centeredness of her children beggars belief.

Director Howard Davies and the cast’s comic skills fail to hide the one-dimensionality of Beresford’s characters. Following her script, Walter’s portrayal becomes slightly too broad and the fate of the children a touch sordid. Ultimately, the family’s demise fails to move or hold real interest. At the risk of sounding uncharitable, it’s probably no bad thing that they are, indeed, the last of the Haussmans.

Written 22 June 2012 for The London Magazine