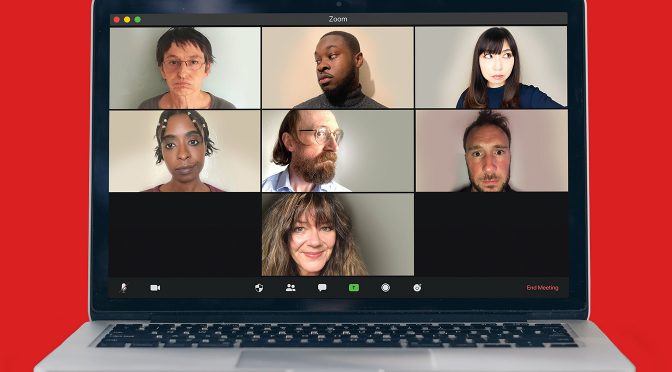 While most of us have surely had enough of Zoom meetings this year, writer and director Jack McNamara uses the format to great effect in updating this show to these coronavirus times.

Continuing the strong work this year from theatre company New Perspectives, the office-based comedy, originally a Lars von Trier film, is a clear candidate for adaptation. The result is nonetheless impressive.

There’s fun from the start as an actress, Kristina, is recruited into a scam by unscrupulous IT boss, Ravn. The jokes about Kristina’s seriousness and pretensions are solid; that she isn’t very successful is worked in well. It will be her job to take the blame for his decisions – pretending to be titular CEO. Needless to say, Kristina ends up taking the role a little too seriously, helping to make “worlds work”, then worrying about her “moral duty”.

A “visionary” IT webinar and staff appraisals follow and are both terrific. A team building exercise works less well (don’t they always?) and the finale isn’t hard to see coming. Ravn’s plot for the company, and the question of whether or not he will take responsibility, are deliberately deflated by the show’s satirical PoMo tone – but that irony is itself predictable. Likewise, oh-so-knowing narration between the scenes enforces how forced the humour is. Which is not to say that you won’t laugh…just that the script is contrived and heavy-handed here.

Adding a sense of joy and fun are strong performances that bring some lightness to the show. Josie Lawrence is excellent as Kristina. To see such an accomplished improvisor joke about the format provides an extra edge. Lawrence is joined by Ross Armstrong, as “giggling shitbag” Ravn, who is just as good. A checklist for poor leadership – “confusing, incompetent and spineless” – each is given its due to great effect.

Those unfortunate enough to work for Ravn also aid the piece. The team has, not surprisingly, a “lot of baggage” – Yuriko Kotani and Angela Bain are especially good with their bizarre backstories. Such eccentrics, traumatised by working from home, get yet more laughs. McNamara is consistently strong with the particular trials of our times so updating The Boss of It All proves a Zoom meeting worth attending. 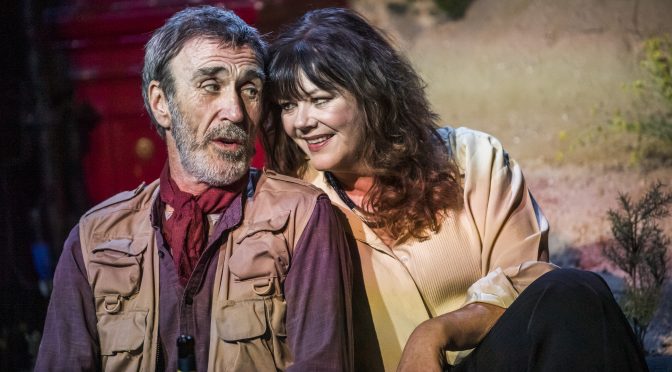 While Don DeLillo’s status as a Great American Novelist, with all those capital letters, is seldom questioned, his work as a playwright is less well known. If this turgid effort, receiving a UK premiere, is anything to go by, that might be best for the great man’s reputation.

The scenario is thin from the start and not developed – a great artist being euthanised by his family after a stroke reduces him to a persistent vegetative state. It’s an important subject, increasingly urgent in our society, but DeLillo adds nothing to the debate. Instead we get recollections of marriage and art that may be of interest, but only if you happen to be an East Coast intellectual. Both niche and unenlightening, it ends up boring.

The characters are well acted but too solipsistic to care about. The charisma needed for the lead comes entirely from Joe McGann’s performance. It’s too hard to credit that others are “clustered” around to support his character’s passing. Josie Lawrence is always watchable as his ex-wife and even manages to inject some humour. Jack Wilkinson takes the part of the son, Sean, and he deals with slowly revealed mixed motives and anger well. But nothing can save incredulity when it comes to the fumbled efforts with morphine; surely you’d read your Google printouts before overdosing your father? The current wife and carer, played admirably by Clara Indrani, has the only part with real emotion. But her role is hampered by some new age sentiment that needs further explication to stop it being nonsensical. When she requests, “Let’s not analyse”, she seems to be in the wrong play.

And these guys talk. Convoluted sentences make up a dense and unbelievable dialogue that ends up a drone. Even at 90 minutes it’s clear some editing is needed, as is energy – director Jack McNamara seems overawed by DeLillo’s text. An effort is made with an expensive set from Lily Arnold – there’s some movement at least – but static scenes drag despite their brevity. Worst of all, nearly every line, no matter how unoriginal or even silly, is presented as profound. It’s an approach that kills the script and hampers the performers. The script is bludgeoned, the performances strangled and the play ends up dead.