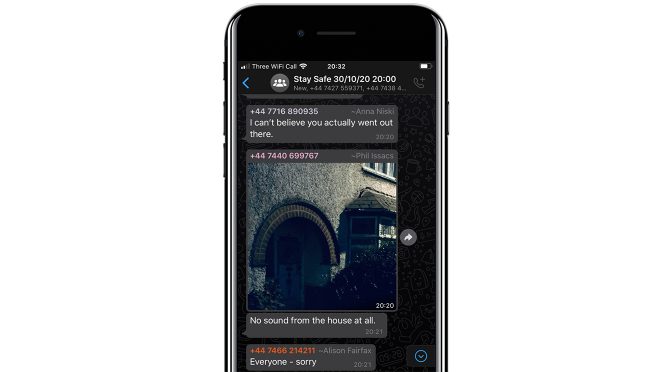 Never short of novelty, the coronavirus lockdown has seen theatre makers more inventive than ever. New productions, such as those from The Original Theatre Company, and plenty of podcasts, such as Seeds, might have been expected. But there have also been installations, at the Donmar, and numerous live streams embracing Zoom. And here’s a particularly fun example of embracing technology from East Midlands-based company New Perspectives – the first drama I’ve come across on WhatsApp.

Billed as a treat for Halloween, the scenario is simple. We are given access to a WhatsApp group for parents whose children go to the same school, one of whom asks about an unknown Mr Mathers that their child has been talking to!

As the story progresses, trying to track this character down, it has to be admitted that the content isn’t original. The piece is working within a genre after all. But it works well. If the twists aren’t unexpected, they manage to raise a smile.

A little spoiler as an example…that it turns out you and the group might be fooled about who is really texting isn’t a huge surprise. But it is an effective use of the format and a smart point; seeding suspicion and menace as well as raising the issue of online security.

Is it scary? So, so…I confess I didn’t want to watch the video clips in case I saw something! But more impressive is Jack McNamara’s writing for this novel format. ‘Eavesdropping’ on a group who aren’t quite friends proves funny. And McNamara turns the action dark and tense with ease. The characters, especially Phil and Meena, become clear and distinct. Correcting their mistakes or faux pas and using emoticons builds up personalities with surprising success.

It is traditional writing skills that really make Stay Safe a success and, as an experience, it’s engrossing and easy to recommend.

There are more good ideas, too, with an eye on festive presents for theatre lovers. New Perspectives has worked with six renowned theatre names to produce limited edition Christmas cards that “reimagine traditional yuletide messages”. And their ‘show’ from earlier this year, Love from Cleethorpes, will also be available again – another different format for drama, this time a play on a series of postcards!