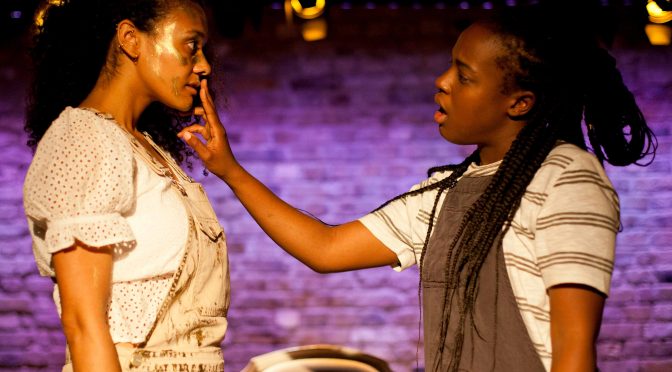 While firmly rooted in the tradition of fairy tales, this 2007 piece, from experimental theatre maker Lisa D’Amour, balances magic and madness with startling originality. It will not be to all tastes, but the complexity and ambition of the text demand respect.

In a trailer park facing demolition, the housebound Irene and her daughter Annabella are joined by the title character, a golem that the youngster creates as she begins puberty. Both of the human characters tell stories that start out whacky and become truly insane. Their small world is crowded with monsters and metamorphosis. Mental illness is a topic the audience is challenged into addressing: someone should help this family… shouldn’t they? And there’s another ‘M’ – motherhood – packing the play’s emotional punch and, for my money, producing its finest moments. Many of the tales told are funny, a few provide insight into the real world and some are frustratingly opaque.

Adding to the bizarre feel, there’s a cappella singing, and percussion from kitchen equipment, with a score by Chris Sidorfsky that matches D’Amour’s otherworldly interests. You don’t often get a lullaby for a lycanthrope, after all.

As you can guess, nothing here is easy for the talented trio performing. The wonderful Beverly Rudd leads the way, grounding the show as a charismatic agoraphobic. The daughter is played by Gabrielle Brooks, who gives a tremendous performance as a young girl old before her time. Brooks’ suggestions of the wild, that D’Amour becomes fixated with, are superb. By no means least, Natasha Cottriall performs as the mythic creation, along with many smaller roles, bringing grace as well as ethereal vocals to the show.

Performing actions as they narrate them makes the demands on all the actors heavier – a lot of what occurs is supernatural – which is where director Jessica Lazar really shines. With a text that’s as much a poem as a play, it takes a close study to aid the audience and I, for one, am grateful that Lazar allows us time to absorb some of what is on offer.

Because Anna Bella Eemareally does have a lot going on, and not just in terms of topics: the imagery is wonderfully rich, the ground covered metaphorically immense and D’Amour’s imagination awe-inspiring. The perspectives that the author describes as “prismatic” in her introduction make the play a mind boggler from the beginning. And we’re warned by Irene that time and reality merge in her trailer – there’s a lot of this.

By the time we get to a dream sequence for Annabella – with racoons, foxes and wolves – the show is in danger of becoming repetitive and exhausting. In the finale, the impact of reality is little explored, making the ending for Annabella unclear. Asking a lot from an audience is an author’s prerogative. But there’s surely an irony that, unlike the fairy tales that are such an inspiration, regrettably, this show lacks universal appeal. 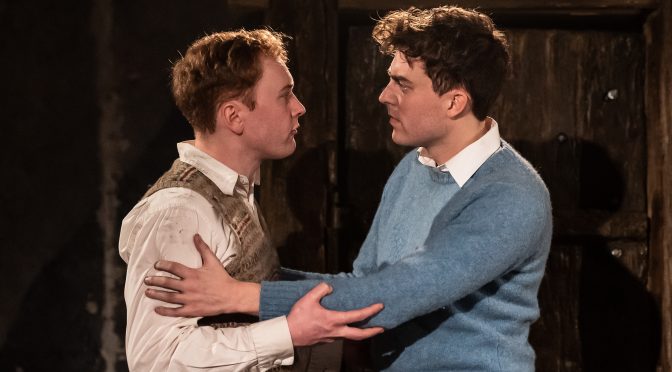 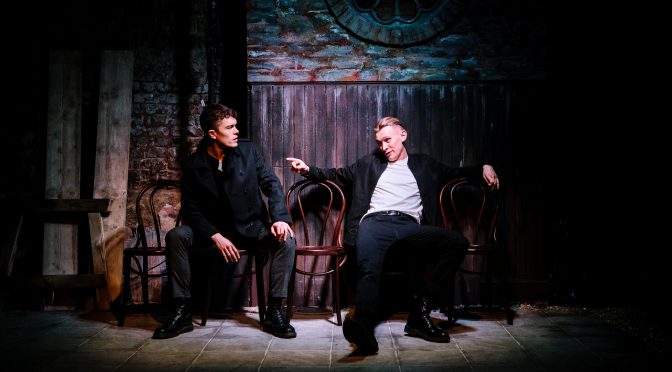 This is a play for the more adventurous. Steven Berkoff’s East returns to its original London venue after 43 years and, courtesy of its clear influence on in-yer-face theatre, feels startlingly contemporary. With meta touches and strong physical performances, including plenty of mime, there’s lots to excite anyone with a keen interest in the stage.

A paean to life in working-class London, Berkoff presents an impressive psychogeography for a quintet of characters. The violence, racism and antisemitism exposed are all unpleasant. But I suspect the sexism here will upset the most. Even when celebrating sexuality and enjoying a crude, ruthless satire, the objectification of women is relentless.

With Berkoff’s reluctance to embrace a traditional narrative, scenes are told and retold from different perspectives. The time of the action slips mischievously between the 1950s and 1970s with some good jokes around this potentially stuffy technique. As for the five characters – personality shifts as much as it develops. Remarkably, none of this is as confusing as it sounds… you just might not like it if you fancy a good story.

An attempt to extend the already quirky time span in the final scene is a slip on the part of director Jessica Lazar – nice try, though. And there are moments when the staging doesn’t take into account the sight lines – disappointing in such a small space. Both criticisms pale when the performances Lazar nurtures from her cast are taken into account.

Debra Penny and Russell Barnett do well in arguably the hardest roles – Berkoff seems toughest on the older generation. With youthful characters, even when unappealing, their energy is exciting: a vitality embraced by Boadicea Ricketts and James Craze, who play a couple in love (or at least lust). The play’s real partnership comes from Craze, as Mike, and his friend Les. A brilliant combination of physicality and comedy marks an astounding professional debut for Jack Condon. Casting directors don’t often get a mention, but Stephen Moore has struck gold here.

Any risk of upset through its confrontational themes or downright rudeness wouldn’t bother Berkoff – the number of expletives tells you that much. And, quite rightly, Lazar doesn’t shy away from any uncomfortable moments. Whether a string of obscenities goes too far is a matter of taste, but sheer repetition makes a couple of scenes tiresome. Overall, though, the play’s appeal rests on its language, which is full of flashes of startling brilliance. Frequently appropriating Shakespeare alongside Cockney rhyming slang creates so much depth and resonance that the “witty verbiage spewing” from every “gutter mouth” has to be heard to be believed.