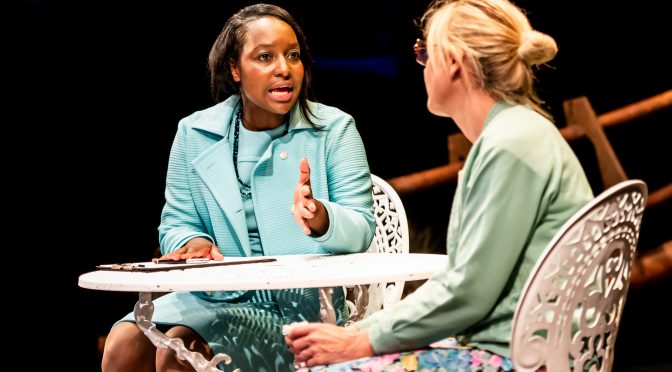 Director James Haddrell and his talented cast bring to the stage four shorts by Caryl Churchill that fans of the playwright will not want to miss. Two pieces tackle the near future and two are relationship dramas. The combination shows Churchill’s breadth of imagination and skills effectively.

The first oddity comes in a piece called Seagulls. Mrs Blair is a “new species of person” who has telekinetic powers. But this isn’t the X-Men. Having introduced the preternatural, Churchill’s ironically mild mannered heroine (depicted conscientiously by Kerrie Taylor) really only wants to feel wanted. A contrast with the ambitions of her friend and now manager, ably performed by Gracy Goldman, broadens out this neat, satisfying sketch.

Closer to sci-fi, set in “The Londons” at a time of civil unrest and pollution, the title of Not Not Not Not Not Enough Oxygen indicates what interests most in this piece. The dialogue for the character of Vivian, superbly delivered by Verna Vyas, contains skilful repetitions that create and sustain an unsettling air of their own. Supported by Dan Gaisford and Bonnie Baddoo, as an estranged father and daughter, the piece from 1971 suffers from being a now generic dystopia.

Moving on to the nocturnal

Arguably the most ambitious piece is Three More Sleepless Nights. This is a trio of scenes, with dysfunctional relationships, each tackled in a very different manner. Firstly arguing; with characters played by Paul McGann and Gracy Goldman speaking over each other throughout. Then a scene with hardly a word; apart from the synopsis of films, that leaves the audience with a horrific image. Characters played by Gaisford and Goldman return in a finale that ties together themes of fear and dependence. For me, what the three scenes really have in common is a technical ability on the part of the cast – hugely impressive.

There is such diversity in Churchill’s work that any favourite amongst the four is a personal choice. But Abortive strikes me as the most provocative and exciting. Taylor and McGann perform this twisty story of an affair, which resulted in a pregnancy, impeccably. Crammed with questions, there is also a character who does not appear to consider. Invited into the family home, the troubled Billie is a vivid and intriguing presence who haunts the couple. Wealth and status are conveyed effortlessly alongside complex motivations and considerable pain.

None of these shorts is that short! So the programme is a huge endeavour on Haddrell’s part, not least the intelligent curation. If all the pieces don’t hold equal interest, contrasting them is stimulating. And the strong production of all combines to make Bad Nights and Odd Days a time to remember.