Irene Sankoff and David Hein’s heart-warming musical is a true tonic that’s guaranteed to raise spirits. It’s feelgood, for sure, but grown-up, too. Based on the true story of air passengers stranded in Newfoundland because of the 9/11 attacks on America, there are hard-hitting moments. But the folk of Gander, who looked after the ‘plane people’ forced to stay with them, show the very best of human nature.

Sankoff and Hein depict a cross-section of travellers and the local community that could be dizzying. Christopher Ashley’s direction is essential for clarity. The point is to show us the gamut of emotions and circumstances, to give us glimpses of lives before, during and after the crisis. With the cast performing multiple roles, several characters manage to stand out to great effect.

The music, inspired by Newfoundland’s Celtic heritage, is rousing, raucous and dramatic, managing to provide a real sense of place. And you will be humming the tunes the next day. If some lyrics are repetitious, they are always efficient. Even humour is crammed in. The key lies in using all members of the cast: their work as a chorus mirrors their characters’ parts in a close-knit community.

Fun comes from the eccentricities of the locals, established quickly and successfully. It could be an odd contrast with the trauma of those coming off the planes, but fear and anger are dealt with sympathetically. And it’s notable that metropolitan prejudices about small places are called into question aplenty. The joy of Come From Away is that it deals with a cliché – of ordinary people doing extraordinary things – so very well.

There is nothing ordinary about the dozen cast members who take on the responsibility of telling the story. They flit around roles with remarkable skill, and also manage to focus on key story lines that take turns to touch hearts, heads and funny bones.

The character of Hannah, worried for her firefighting son back in New York, is sure to stand out, but Gemma Knight Jones, who takes the part, is outstanding. Jonathan Andrew Hume and Mark Dugdale’s storyline as a gay couple does a lot of work to question assumptions and the performers are excellent. Another romance, between Kate Graham’s Diane and Alasdair Harvey’s Nick, is sweet. All the while, James Doherty’s mayor marshals the action. That’s only half the cast, so forgive me. The real achievement is the work of everyone on stage as an ensemble – moving together and sounding fantastic – bringing both energy and sensitivity to a great story. 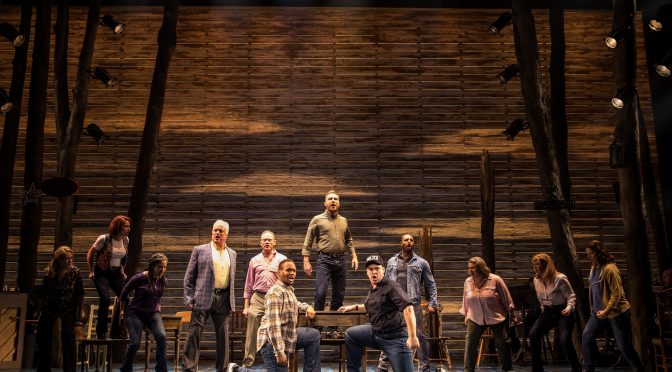