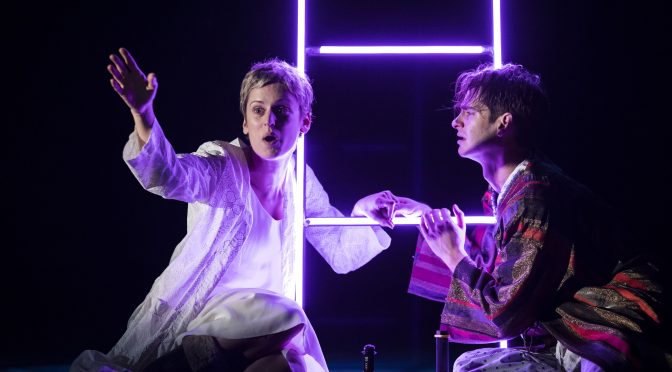 Any production of Tony Kushner’s masterpiece is a cause for celebration. Presented in two parts, totalling nearly seven hours, and combining the AIDS crisis with speculation on America’s history and its future, epic is an apt word. Add the stellar cast and it’s hard to be inured to the hype surrounding this revival on the Southbank. The difficulty of getting tickets, plus ecstatic reviews and a sense of responsibility towards the play, whose premiere at the National Theatre in 1992 is fondly remembered, create palpable anticipation. And the production is superb – a theatrical event – even if it struggles under the weight of expectation.

For unmitigated praise we can begin with the cast. Andrew Garfield plays Prior Walter, who reveals his HIV status at the start of the play to his boyfriend, Louis (James McArdle), who promptly deserts him. Both grippingly portray their relationship breakdown – McArdle does a great job creating sympathy for his unlikeable character. As Prior’s health deteriorates, Garfield takes the lead with a combination of dignity and no-nonsense that perfectly reflects the text. When it comes to Prior’s encounter with angels – and in this play they are real – the juggling of fear, amazement and humour is superb.

Another couple in trouble are the Pitts, two Mormons living in a sham marriage. Russell Tovey plays Joseph, tortured by his sexuality, with sensitivity. An affair with Louis comes as a revelation to him and fills the theatre with tenderness, while the betrayal of his wife, Harper, is moving and complex. It’s another triumph for Denise Gough, as the pill-popping spouse whose religious background and secretive husband are driving her insane. There’s that Kushner combination again – of humour and self-awareness – that Gough reveals expertly. Someone should save us all time and hand her another Olivier award now.

A final duo deserves a mention: Broadway legend Nathan Lane, who brings a startling humour to the role of closeted lawyer Roy Cohn, and Nathan Stewart-Jarrett as his nurse Belize. Their sparring matches, as Cohn lies dying of AIDS, are a highlight. Stewart-Jarrett impresses throughout, excelling as a foil to Prior and Louis, and deftly carrying the weight of Kushner’s concerns over racism.

Angels in America is hard work, especially if you are lucky enough to see both plays on the same day. It isn’t trying to be easy, of course: the emotional journey taken by its many characters is harrowing, but the scale and scope of ideas needs controlling and the fear is that director Marianne Elliot has herself become overawed. There’s not enough “mangled guts” here – the play’s visceral text, so full of struggle, is sanitised as a ‘classic’.

Connections between the characters, clear enough in the script, become laboured. There are few light touches, literally so when it comes to Paule Constable’s lighting design, which dominates Part One in particular. A claustrophobic feel, pinpointing scenes in spotlight, is presumably to create focus, but the result is soporific.

It’s not the play’s length that is the problem – the plotting is impeccable – but the pacing, which flags. The main culprit is a cumbersome set by Ian McNeil, with props moved around by a collection of ‘Angel Shadows’ who become distracting. This choreographed troupe does stronger work as skilled puppeteers with the arrival of The Angel (the always superb Amanda Lawrence). But even here their scenes feel protracted. Elliot’s reverential air brings us down to earth, even if most of her production is heavenly.