The life of Ernest Boulton, the infamous Victorian cross-dressing entertainer, is a fertile source for fiction. Barbara Ewing’s book is recommended and a previous play, Fanny and Stella, made light work of this fascinating history. Neil Bartlett’s new piece is a more serious affair, deftly plumbing issues of gender identity and politics with sensitivity and intelligence.

Bartlett describes his play as a ‘one-man-show for two bodies’. Such succinctness is a boon for me as describing this bold and rich work isn’t easy. Following what’s going on is fine (read the free programme for the biography) but, while the older Ernest talks about the past and present, the younger version dresses for a night out as Stella and contemplates the future. It’s a deliberately fluid affair. Add direct addresses to the audience along with the characters advising one another and you have to have your wits about you.

To play directly alongside another performer who has the same role, just at a different age, must make the job peculiar for a performer. There are two brilliant actors here: Richard Cant and Oscar Batterham are remarkable for their focus and synchronicity. In attendance is a third, silent figure, played by David Carr, who serves (to my somewhat literal mind) as a memento mori: helping with make-up or aiding the frail Boulton awaiting a hospital appointment.

The piece’s construction demands further study. Scripts of plays Stella performed in are used. Interviews were conducted with transpersons today and some of these “found their way into Stella’s mouth”. The aim is to show a character on his/her own terms. Boulton’s potential as a pioneering transperson isn’t essential – it’s transformation per se that is the focus.

The various roles that Boulton enacted, literally on stage or as a sex worker, for example, enforce the theme of fluidity. As such, Bartlett’s play is radically political, his independent thinking inspirational. Yet the overriding theme is when the writing really takes off and we see Stella as a meditation on life and death. With its reflections on the passing of time, and how this transforms us all, this play is full of good, old-fashioned wisdom.

Part of the LIFT Festival 2016 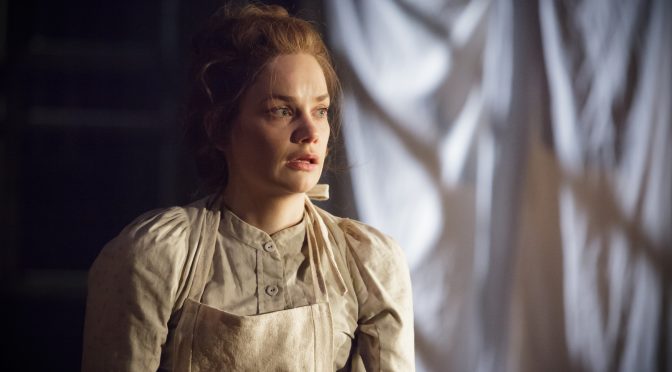 Hoxton Hall has been transformed for a short run of three one-act plays by Eugene O’Neill. Billed as The El. Train, with the action set beneath the bustle of the New York Subway at the turn of the century, there are no long journeys to endure here as the short pieces run right on time. O’Neill’s bleak themes of desperation are easily recognisable, but this is an night of drama and action, backed by a superb jazz soundtrack, with original music from Alex Baranowski, that adds a satisfying unity to the evening.

The first two plays, Before Breakfast and The Web, are superbly directed by Sam Yates. Both star two-time Olivier Award winning Ruth Wilson who gives versatile performances as a downtrodden wife and an abused prostitute. Before Breakfast serves as a commanding monologue, produced with gripping precision from both director and actor. Special praise goes to the carefully delivered humour brought out in the production – a clear indication of the intelligence behind the whole evening. The Web is an even darker exploration of a criminal underworld. The unbelievable cruelty of a pimp, portrayed effectively by Zubin Varla, an heroic rescue, and a baby thrown in for extra emotion – there’s a little too much going on for its own good. But Yates does a superb job to embrace and pace the action. Wilson’s reappearance in this role, as a consumptive streetwalker, close to death, is tremendous.

A transformation marks the finest theatrical moment of the final piece as well, with Nicola Hughes metamorphosing into an elderly woman as she sings between the plays. In The Dreamy Kid, Hughes’ Mammy Saunders is on her deathbed, waiting to say goodbye to a beloved grandchild. He is being watched by the police and his visit will be a trap as his crime catches up with him. The play marks Ruth Wilson’s directorial debut, a cleverly modest one, which takes a lead from Yates’ work and maintains the high standards and exciting tension.

And to round off a fine evening, an accompanying bar benefits from the atmosphere the talented musicians on stage have established so well. The Hell Hole Saloon is a pop-up venue that ostensibly takes its inspiration from the Golden Swan saloon O’Neill frequented. It’s much nicer really, with themed cocktails, including a delicious hot buttered rum which is perfect for the season, and fantastic service under the supervision of award-winning bartender Joe Stokoe.

Written 14 December 2013 for The London Magazine