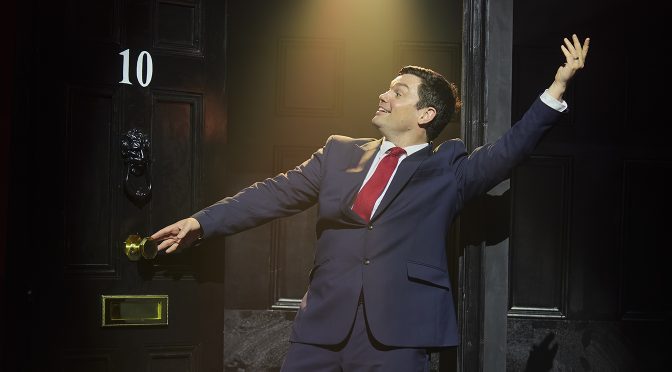 You might remember our former Prime Minister’s appeal for Cool Britannia pop stars, or that the man himself was once in a band. But a musical about Tony Blair is still a crazy idea. Which is partly the point of this gloriously mad show from Harry Hill and Steve Brown. Tony! must be seen to be believed.

This trip through Blair’s life and career is crammed with jokes, from simply awful puns to references and catchphrases. But note that you need be a specific age to appreciate the show. The interval saw some frantic Googling and puzzled under-40s.

As a history of New Labour as much as one man, Hill and Brown are so keen not to eulogise their subject that they end up a touch fanatical. The show isn’t scared of offending anyone – which a lot of people commend – and some of the jokes are jaw-droppingly tasteless.

Tony is presented as a grinning idiot. Charlie Baker does well in the lead role. Howard Samuels’ Peter Mandelson is predictably Mephistophelean, but drives the action effectively and gets to do a trick with a balloon. Just how much Holly Sumpton’s Cherie gets out of a Liverpudlian twang is a constant surprise. There are so many cameos I lost count, but I won’t forget Madison Swan’s perfect Princess Diana in a hurry. The joke is that the production is rough, ready and self-referential – I’ve never seen so many bad wigs – and the technique is effective if you have a good memory.

Unfortunately, the musical performances are underwhelming. As for the songs themselves, your toe might tap and the mix of pop pastiche is enlivened by ballroom variations that could be made more of with a bigger band. Tony! is more a revue than a musical, which is fine, but some of the singing is just poor.

It’s Hill and Brown who end up the stars. As well as their comedy careers, they produced the underrated I Can’t Sing and their distinctive sense of humour has a great surreal touch. Combining satire with silliness, you can never quite guess what’s coming next. A lot of it is crazy, some of it cheap and nasty, but I did laugh a lot.

It’s a shame the production doesn’t end happily. But then neither does any career in politics. How to handle the war in Iraq is a concern literally voiced by characters. Inspired by music hall, numbers for Osama bin Laden, Colonel Gaddafi and George Bush aren’t a bad idea. Director Peter Rowe’s efforts to speed up the pace are wise, but the laughs dry up. It’s a shame, really. There’s plenty of talent and clear intention, but it all goes a bit wrong. Now what does that remind me of?