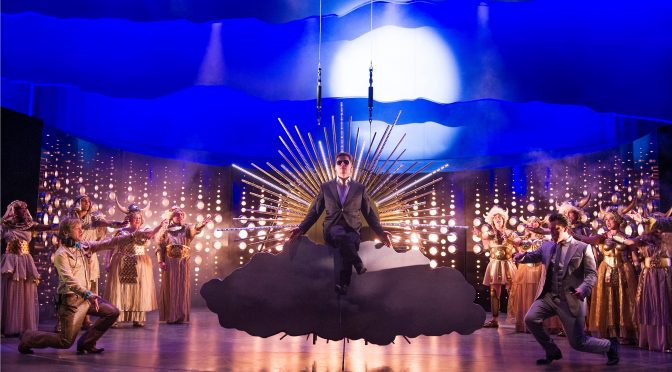 I Can’t Sing! The X Factor Musical, which opened this week at the Palladium, is a logical fit for the theatre. It might be TV, but it’s live, essentially a variety show, with large personalities that can fill a stage. The show’s creators, Harry Hill and Steve Brown, exploit the backstories of the characters and possibilities for songs mercilessly for comedy. At once sincere and surreal, the show might just have that indefinable quality that makes a hit musical – it’s very own X factor.

But first a confession from your reviewer. I’ve never watched The X Factor. Forgive me – I’m at the theatre a lot. As well as making me akin to an alien, this created a concern that I might not have a clue what was going on. As it happens I found lots of it funny. There are a surprising number of theatre jokes and, as most do know the show (like the row behind me), I can report that you’ll be laughing like the proverbial drain. I am qualified at least to say that Sean Foley’s direction is assured and that reports of troubled previews don’t seem to have rattled the fine performers.

The leads of the show provide a plot, a neat little love story between two contestants. Cynthia Erivo plays Chenice, whose backstory – take a deep breath – of life in a caravan under the Westway with a grandfather in an iron lung and not enough money to study UFOs at Golders Green University, is so tragic that it’s envied by other contestants. With a knock-out voice that brings out the irony in the show’s hummable title song, Erivo is joined by Alan Morrissey, who has an appealing stage presence as a plumber with a ukulele who wants to change the world with his songs. The other contestants do well, too, but it’s the ever excellent Simon Lipkin who gets my vote, using the puppetry skills that made Avenue Q such a success to play Chenice’s dog, Barlow.

There are strong comic turns from the judges: the geriatric Louis (Ashley Knight) and Geordie Jordy (Victoria Elliott), headed of course by Simon Cowell, a role energetically taken by Nigel Harman. Like his television creation, Cowell seems self-consciously ripe for satire. Being lampooned so successfully must delight him (as a backer for the show) and the sheer silly scale of the satire, much of it literally messianic, keeps coming. The show contains no subtlety, surely that would be inappropriate – just a lot of laughs.

It’s a musical, so let’s not forget the songs. Brown’s compositions are efficient, and varied, but the music is very much subservient to the comedy. Several numbers are disappointing and only get along by being very loud. But, as well as the title song, there’s another great number for Morrissey, a moment of stillness among too many mock anthems that really stands out.

You could take a guess that there will be choreography with sofas. Tick the box for dancing leprechauns. I am even sure I’ve seen break-dancing monks before and, as with Jerry Springer The Opera, there are Valkyrie on call. And there are still surprises, mostly theatrical I am pleased to say, and bizarre enough to really delight in their eccentricity, with touches of George Formby, postcard-style humour and plain silliness.

There’s a strong sense of weird and wonderful minds behind I Can’t Sing! that avoids any sense of attempting to cash in on a successful formula. It’s mad but also clever stuff. And it works. Combining the prosaic and clichéd with extravagant dreams, there’s a satisfying circularity in what Hill and Brown have achieved – a show so ridiculous that it becomes inspiring.

Written 28 March 2014 for The London Magazine