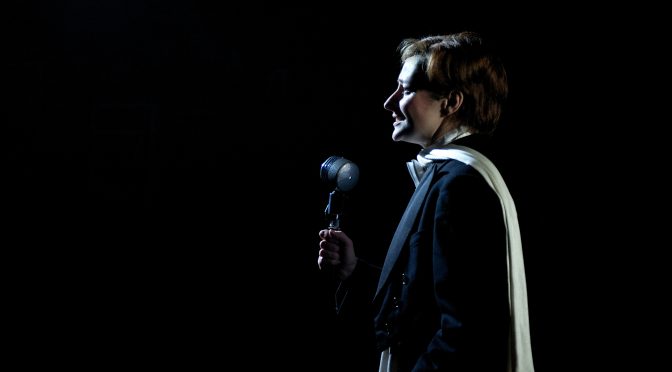 Blake Edwards’ joyous, gender-bending musical comedy – with music and lyrics by Henry Mancini and Leslie Bricusse – is sure to please. The story of a soprano who disguises herself as a man performing in drag, Thom Southerland’s new production at the Southwark Playhouse, is a bold rendering full of expert touches and an abundance of talent.

Staged in traverse, and superbly designed by Martin Thomas, Southerland and his choreographer Lee Proud make the most of the show’s cabaret numbers. No tunnel under London Bridge ever looked this good; it’s a most welcoming cabaret, with a fantastic atmosphere from start to finish.

Taking the title role, Anna Francolini makes the most of this star vehicle and her performance has an emotional edge that is genuinely affecting. It helps that she sounds fantastic, too, and can deliver a tricky dance routine. The show stopping numbers, Le Jazz Hot! and Louis Says, are a  delight and the ensemble are superb.

Matthew Curtis plays her love interest who, Orsino-like, is puzzled by his desire for the ‘man’ he sees on stage. Curtis delivers his challenging solo number marvellously. But it’s Victor/Victoria’s impresario and best friend, performed by Richard Dempsey, who steals the show. Camp as Christmas and loving every gloriously silly moment, the incorrigible, Shakespeare-quoting, “Toddy” charms all and gets the loudest guffaw I’ve heard in the theatre this year. But, I won’t spoil the joke – buy a ticket to make sure you don’t miss it.

Written 2 November 2012 for The London Magazine