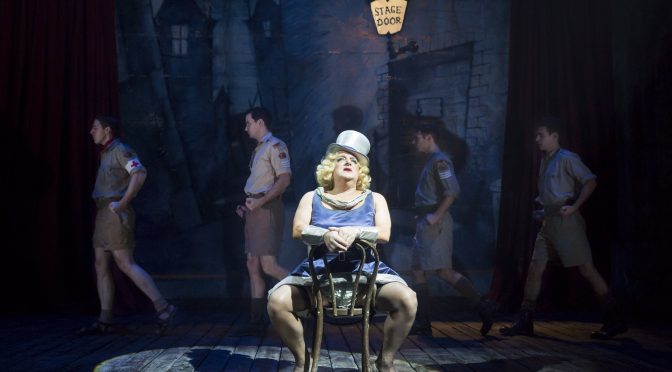 Privates on Parade marks the start of the Michael Grandage Company’s exciting residence at the Noel Coward Theatre. Peter Nichol’s play about an army song and dance unit in Malaysia during a time of colonial struggle, has “the Queers and the Boys” camping it up to entertain the troops. The service is a refuge for gay men and misfits fleeing from Atlee’s Britain, but the vicissitudes and corruption of Army life, along with a mad major, make the escapism on stage essential: no matter how hard these guys try, their lives are far from a cabaret.

Taking the flamboyant lead is the Unit’s ‘Auntie’, Acting Captain Terri Dennis, a man on a mission to do his best for the boys on stage and off. Simon Russell Beale is hilarious in the role (his Marlene Dietrich routine has the audience in stitches), but he’s more than this – showing us the man behind the costumes. He makes the crass seems classy and the double entendres close to wit. The ensemble’s rendering of Denis King’s songs is skilful, with just the right amount of fluff to remind us that these men are, for the most part, amateur performers and conscripts far from home.

By contrast, it’s when the music ends, that things start to drag. Only Harry Hempel manages to match Russell Beale in finding the depth needed when the piece aims at intense drama. The end-of-empire politics of the play are supposed to jar with the high jinks on stage but the elements of farce in military life aren’t played with a dark enough edge and the rest of the show is so funny you really just want to focus on that. Grandage is lucky that Russell Beale as Carmen Miranda still makes the show worth it.

Written 13 December 2012 for The London Magazine