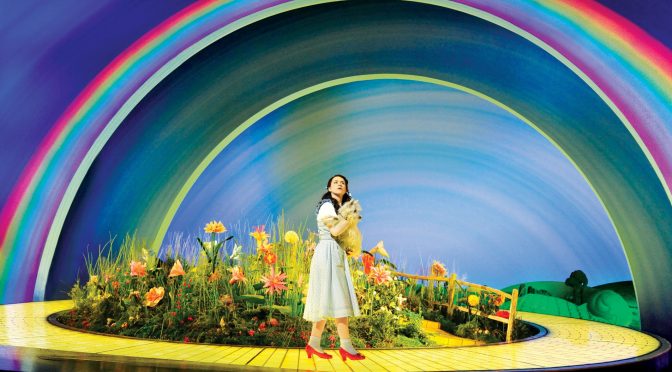 With The Wizard of Oz we yet again have proof of Andrew Lloyd Webber’s unerring focus and entrepreneurialism – not only has the maestro produced a terrific live family show, he has even guaranteed it an audience with the aid of a hit TV series, Over the Rainbow.
The new star born is Danielle Hope, whose trials to gain the lead role of Dorothy have so enamoured her to BBC viewers that they now feel duty bound to catch the coach to London and see the show. It makes for a warm atmosphere, as the crowd wills her on to succeed. And Hope manages well – she is an engaging presence with a sweet voice and a remarkable confidence on stage.

It seems damning to say that Hope’s greatest achievement is putting up with Toto. One of the warnings about working with animals should be that a dog on stage can steal the show. And that really isn’t fair. As this poor creature is dragged around, looking by turn bemused and bored, you can’t help fixating on his clever handling and the treats he is cajoled with.

Which is a shame because the treats here aren’t just for Toto but for all the children in the audience. The Wizard of Oz is aimed successfully at youngsters who will, without exception, adore it. A whole team of designers, headed by Robert Jones, have done a superb job, Jon Driscoll’s projections recreating the tornado are impressive, and the costumes are fantastic. Harold Arlen’s great songs are added to by additional music from Lloyd Webber.

Dorothy’s companions on her travels give impressive performances that embrace the show’s camp appeal. Edward Baker-Duly is a matinee-idol tin man, Paul Keating a remarkably acrobatic scarecrow and David Ganly excels as the cowardly lion who is proud to be a friend of Dorothy.

Using a bit more of L Frank Baum’s original story than we are familiar with from the film is a clever move. It treats us to some choreography from Arlene Phillips and gives the talented Hannah Waddingham a chance to shine (via a great lyric from Tim Rice) as the Wicked Witch of the West. The only disappointment is that the additional songs to boost Michael Crawford’s role as Professor Marvel and The Wizard still leave him criminally underused.

Leaving Crawford’s many fans disappointed seems strange, as everyone else in The Wizard of Oz works as hard as Kansas farmhands. Director Jeremy Sams follows the yellow brick road with the precision required for such a spectacle and the determination needed to captivate a young audience. It’s safe to treat any children you know to the thrill of this show. The only thing you might worry about is the effect of all those doggy treats on Toto’s waistline.

Written 3 March 2011 for The London Magazine