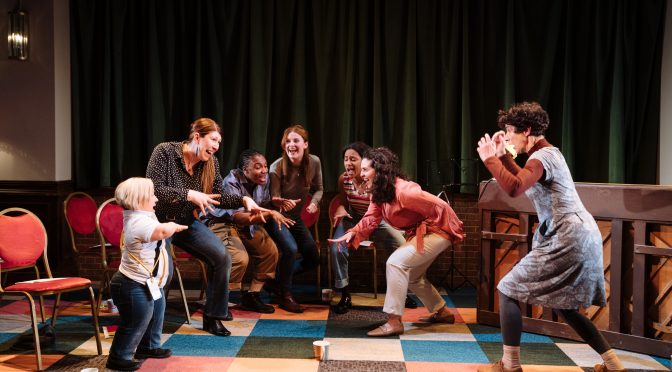 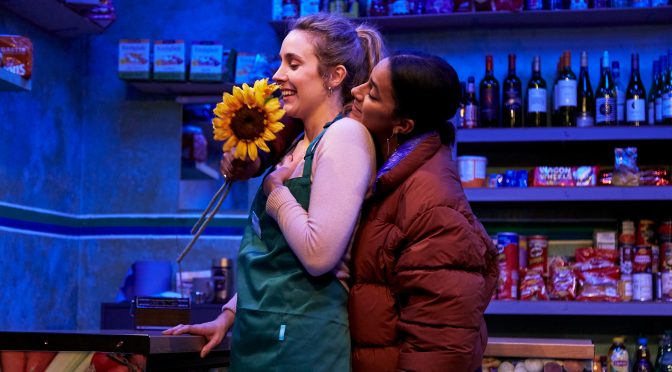 Here’s a strange situation – writing a review you don’t really want anyone to read. Because much of the success of Tabitha Mortiboy’s new play, staged with customary skill by Damsel Productions, comes with the journey it takes and the twist it contains. Do see it for that alone, as surprises in the theatre are memorable treats.

The Amber Trap opens on a gentle romance. Katie and Hope are lovers who work together in a small shop, and Oliva Rose Smith and Fanta Barrie make the young couple a pleasure to watch. Obviously, you know the course of this true love will get bumpy and, when gap-year would-be medic Michael arrives, youthful, keen and cute, it seems we’re in for a coming-of-age story. Here, the questioning of sexuality is nicely written and handled with sensitivity, yet might have a surer grasp of its comic potential.

Things become more serious and thought provoking – but not quickly. Director Hannah Hauer-King respects the text and doesn’t rush, lulling us into a false sense of security. The care Hauer-King takes is clear and convincing. In truth, the play isn’t quite long enough. The role of the shop’s manager, an older, soon-to-be divorcee, becomes a bit of a puzzle and proves a part that Jenny Bolt has to struggle with. But Hauer-King gives the show weight, with judicious pacing that demands pauses for thought.

The thinking that creeps up on us is a serious point – which should occupy us all, but often doesn’t – that shows Mortiboy has her finger on the pulse of debate. The play reveals Michael’s male, heterosexual gaze on the female, gay couple. I’m a little too squeamish to enjoy Mortiboy’s heavy metaphor with an eyeball, but it’s effective (just ask George Bataille). And the point that Michael demands control, with a chilling infantile glee, is important. His view of the women is on a spectrum of cheap thrills and insulting disbelief, while his crush on Hope becomes increasingly menacing.

Michael’s impact on the couple is scary and all too real, and Katie and Hope’s responses of, respectively, fear and anger are on the nose. Rose Smith’s powerful reaction to a cheeky kiss Michael steals is salutary – this is not an act to dismiss (were you tempted to?). But it’s the role of Michael that is Mortiboy’s key move. His slight physicality, youth and status as the new arrival at work – all of which Misha Butler, who takes the part, carries well – cannot diminish his privileged position among the women. Michael’s sense of entitlement may be exaggerated for dramatic effect – and arguably the action turns nasty too quickly and too close to the end of the play – but, as his instability becomes obvious and his toxicity infectious, the bold structure makes the piece original, disturbing and rather brilliant.