Grateful as I am for the various shows put online during lockdown, this one made me sad! Of course, this was never the intention behind Barrie Rutter’s fine production, but it only serves the truth that filmed versions highlight how much better live theatre is and why we miss it so much.

Having seen the show ‘for real’ and being happy to watch it again indicates the strength of Rutter’s work. This is far from Shakespeare’s finest play: written with John Fletcher, the love-at-first-sight romance seems ludicrous, the characters schematic and the themes of honour silly. If it weren’t for beautiful poetic moments (and the fact he isn’t guiltless of all three problems elsewhere) you’d question whether Will had anything to do it.

There is still a grandeur behind Moyo Akandé and Jude Akuwudike, who play Hippolyta and Theseus, showing us courtly concerns with a touch of humanity. And Ellora Torchia does well as the princess who has to choose between the titular heroes – one of whom will die – showing an appropriate incredulity as well as sensitivity. Staying centre stage when the final fight goes on, this “maiden-hearted” bride-to-be proves fascinating. The kinsmen, played by Paul Stocker and Bryan Dick, are great – suitably dashing but also funny – with a similar knowing air behind the performances. But, on film, none of this talent is quite enough to make it all engaging.

The camera shows up all the text’s troubles. Stripped bare, without the atmosphere of the theatre, the play drags and all the work done to inject energy or touches of cynicism is lost. The excellent treatment of “country pastimes”, including a fantastic dance, sounded much better live and were full of details lost in the filming. One criticism stands: the unrequited love of the jailer’s daughter (Francesca Mills), which literally drives her mad, is played too much for laughs. And on a screen this poor version of Ophelia feels even colder and crueller.

The biggest problem is that, with the camera dictating what we see, a sense of momentum doesn’t come across. With characters “beyond love and beyond reason”, it’s necessary to drive the action along, which Rutter did with distractions including music and musicians. It made for an effective night out. Nobody wants our theatres open again more than those who work in them, and this show reminds us how much better it is to see plays where they belong.

Available until 17 May 2020 on globeplayer.tv 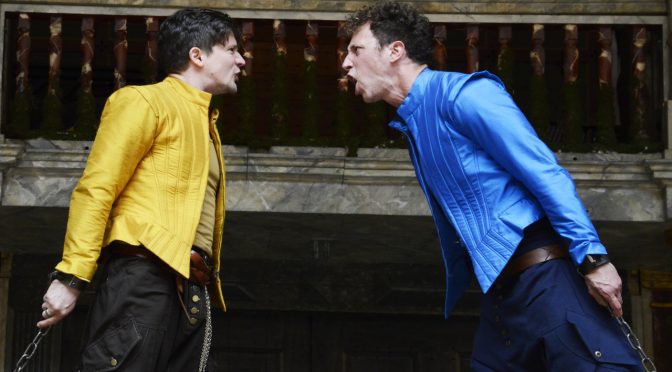