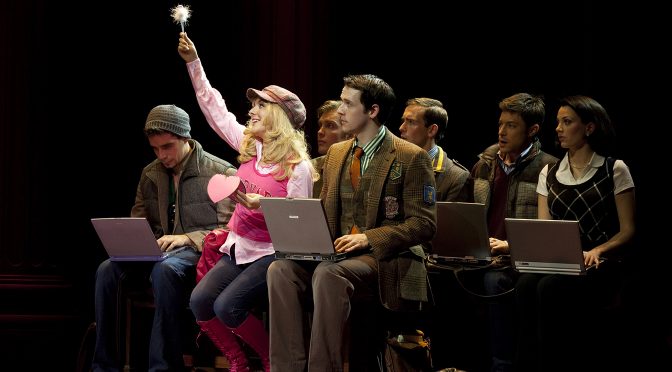 The London Magazine offices are right next to the Savoy Theatre and over recent months we have seen the preparations for London’s latest big musical Legally Blonde. The most exciting thing has been the dogs in the cast, six in all who take turns performing, accompanied by trainers and carers and looking every bit the celebrity, as Chihuahua’s tend to do.

The concern was that they might be the best things about the show.

The thought of yet another musical based on a movie may fill you with trepidation.  For all the success of Billy Elliott anyone who sat through Footloose will sense a certain dread.  Legally Blonde, a film with no musical connection, seems an odd choice.

But silly plots and simple morality tales have potential.  It seems Sonia Friedman has chosen wisely in bringing this Broadway production to London.

Elle Woods appears to have everything – youth and beauty with a privileged upbringing. Her confident plans for continued perfection however, go awry when her intended fiancé snobbishly reveals she is not good enough for him. Elle turns out to possess more than we suspected though, with plenty of determination and brains, as well as heart, she follows her love to Harvard to become a lawyer.  So begins her real journey of self-discovery.

Naturally most of the audience already know the story and simple as it is the action can be swift with plenty of time for musical interludes. And the music from Laurence O’Keefe and Nell Benjamin really isn’t bad. I heard several people humming the main theme in the interval alone. There are saccharine ballads should that be your thing, performed with confidence by ‘Duncan from Blue’ – they left me cold but I suspect I wasn’t the target audience. To compensate, Elle’s main refrain has more emotional depth than might be expected.

The music’s strength is its comedy.  Peter Davison plays Elle’s tutor, a charismatic villain with a great introductory number.  Amy Lennox plays Margot, a video fitness guru, who is to be defended by Elle’s legal team.  She opens the second act with a workout inspired routine set in a prison that has fantastic energy and wakes up the fathers in the audience.  There’s even a potential showstopper in the number ‘European or Gay?’  The title says it all.  The ensemble knows they have a winner and thoroughly enjoy themselves.

Further praise goes to Alex Gaumond who plays Emmett. As the man we want Elle to end up with he reinforces the central theme of being honest to yourself. He also gets a makeover as Elle takes control of his wardrobe and ticks a lot of musical theatre boxes.

The undoubted success of the evening lies in the casting of Elle, she must hold the show together and bring things into a coherent whole. Sheridan Smith shines in this role. Along with a great voice, her presence on stage is always appealing and she possesses an effortless comic talent that makes some frankly feeble jokes go a long way. You will laugh – I promise you.

Legally Blonde is silly stuff but it knows that and it enjoys it. It genuinely contains something for everyone.  Director Jerry Mitchell and writer Heather Hach have cleverly constructed a musical that will please its natural audience but also entertain others. A lot of people will be surprised at how much fun they have and that is not to say that they dogs aren’t great.

Written 14 January 2010 for The London Magazine