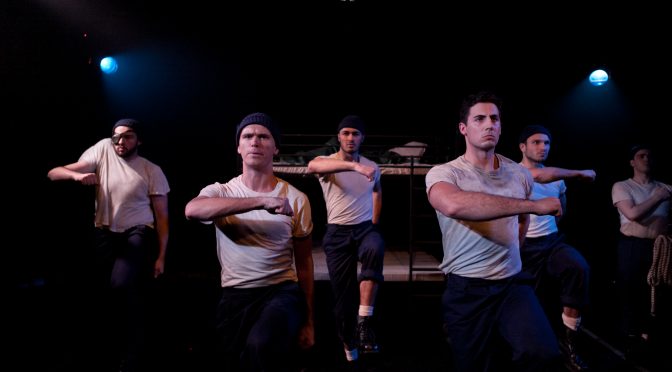 Given their success on London’s fringe theatre scene, Sasha Regan’s all male productions of Gilbert and Sullivan are much anticipated. Her latest, H.M.S. Pinafore, would seem a natural selection from the Victorian composer and lyricist’s opus – a story full of camp potential, with plenty of sailors and satire. The production lives up to expectations and also surprises.

Not content to rest on her reputation, Regan adds a sense of melancholy to the usual wit and fun. The cast are deliberately presented as though improvising, and so the production opens up some interesting questions: are we here to watch ‘real’ sailors aboard a ship, prisoners of war trying to alleviate boredom, or possibly children at a boarding school? It’s a brilliantly original twist that will win your heart.

Rough and ready staging becomes a powerful tool. So much is achieved with just ropes and kit boxes. The design from Ryan Dawson-Laight, full of inspired touches, including shirt collars used as millinery, contributes to making this show immediate and involving – bunk beds have never been this much fun. And that’s saying something.

From the heroic sailor Ralph, an appropriately dashing Tom Senior, fighting for his love to his Captain’s daughter Josephine, played by Bex Roberts (a  male  actor, to clarify), the cast sound fantastic. As her father the Captain, Benjamin Vivian-Jones is magnificent, bringing out the laughs and in fine voice. Ciarán O’Driscoll renders buttercup, the “plump and pleasing person” who is the key to the ‘topsy-turvy’ story, both loveable and formidable. Accounting for the highest and the lowest in this magnificent class comedy, Lee Van Geleen impresses with his fantastically powerful voice as the dastardly Dick Deadeye and David McKenchnie gives a superb comic performance as The Rt. Hon. Sir Joseph Porter, K.C.B.

The inventive staging by Regan, along with fantastic choreography from Lizzi Gee, is a constant delight. The ensemble show their talent, morphing from exercising studs into the gaggle of “sisters, cousins and aunts” that accompany the Rt.Hon, for comic touches a plenty. Special note has to be given to be given to Richard Russell Edwards as Hebe, who can swoon with the best of them. And finally, underpinning all this is the musical adaptation from Michael England and Chris Mundy, extracting the spirit of the score with an intelligent transformation accommodating all male voices.

Even if you’re a G&S fan of a more traditional persuasion, you’re still going to love Regan’s work. There is a reverence here in the best sense of the word – a genuine enthusiasm and love of the piece that is infectious. This is one of the best shows I’ve seen this year and although it’s only November, and there are plenty of exciting things coming up, I doubt it will be bettered in 2013.

Written 4 November 2013 for The London Magazine