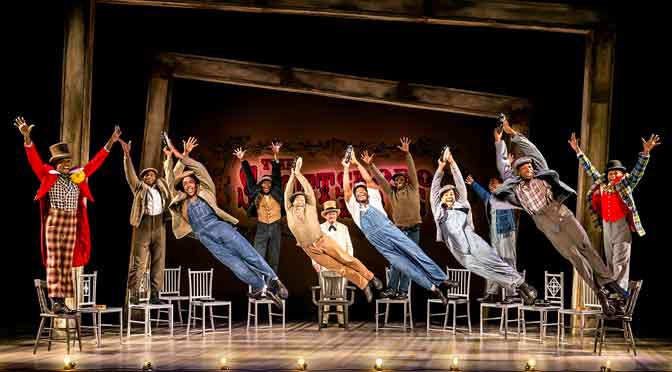 A sell-out last year at the Young Vic, with rave reviews, The Scottsboro Boys has now transferred into the West End. Kander and Ebb’s last musical, the story of an infamous miscarriage of justice in 1930s Alabama, is a harsh, uncompromising look at racism that makes for powerful musical theatre.

The performances are great, with key cast members visiting from Broadway: Brandon Victor Dixon, Colman Domingo and Forrest McClendon all take on demanding lead roles with inspiring confidence. The whole ensemble is tight and standards of acting high. The staging is sparse – director and choreographer Susan Stroman uses chairs to create the sets – it’s inventive but feels a little lost in a big space.

Kander and Ebb never shied away from ‘difficult’ subject matter. Don’t forget, Cabaret and Chicago are about Nazis and gangsters. Their final work together was just as brave: accused of raping two white girls, nine blatantly innocent black men spent years in prison and fought trial after trial, becoming a focal point for the civil rights movement.

The music will sound familiar to fans, but the approach here is as bold as the subject matter. Taking on the format of a minstrel show (akin to appropriating cabaret and vaudeville for their previous hits) the black actors perform white roles, serving as a commentary on racial stereotypes that is provocative and tense. It’s a reflection on the entertainment industry as well, with the stock characters of Mr Tambo and Mr Bones creating an uncomfortable undertone.

There were small protests at the use of a minstrel show on Broadway. I can’t see the reason myself – the criticism of the genre is so implicit and the final rejection of the format by the performers, who refuse to do the Cake Walk, is rousing. But the humour here is harsh and bleak making The Scottsboro Boys unusually devoid of laughs. This show is a huge achievement, but not an easy night out.