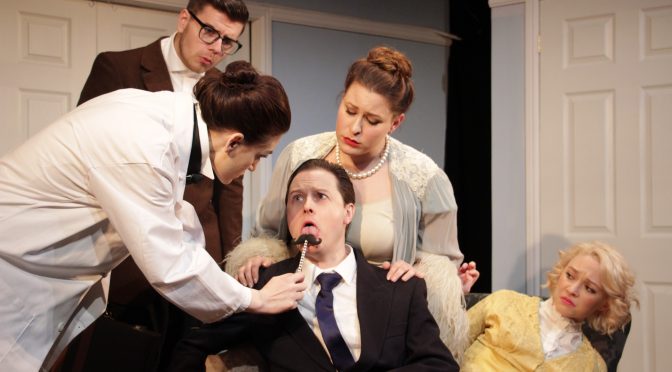 A cast of six share 15 characters in this French farce, which provides much of the fun in a fresh and foul-mouthed adaptation of Georges Feydeau’s classic, translated by Sacha Bush and directed by Alex Sutton. With its doppelgänger plot line, costumes and accents summarise characters and performers stand in for colleagues, creating a conspiratorial air to the ooh la la comedy that gets the audience as high as the Montgolfier brothers by the interval.

The second act is a disappointingly bumpy ride, with too much running about and far too much fainting. The production’s strengths are in the details. Fun songs comprised of random French words are a highlight, along with camp touches, knowing glances and fun with national stereotypes, ‘Allo ‘Allo! style.

Dominic Brewer and Haley Catherine play (mostly) the couple whose rupture conjugale drives the plot, seldom dropping a beat. Rachel Dawson is superb as their posh friend Lucienne, likewise Richard Watkins as their nephew with a (sorry) funny speech impediment. Good taste often leaves the stage – especially in scenes at the Pussy Cat Hotel with Watkins’ Austin Powers-inspired manager – but this team lands the laughs.

Jamie Birkett is a natural comedian, getting a great deal from her doctor character’s moustache on a stick. For sheer variety of accents, she is neck and neck with Clark James, who plays a violently jealous Spaniard and a Brummy insurance clerk. Just to even things out, Birkett and James share the cameo of the one Brit to appear (in Union Jack underpants, of course). Minor set malfunctions are taken in James’s stride – showing how focused as well as funny his performance is – he and the flaky wallpaper panels aren’t the only brilliant moments in a très jolly night out.