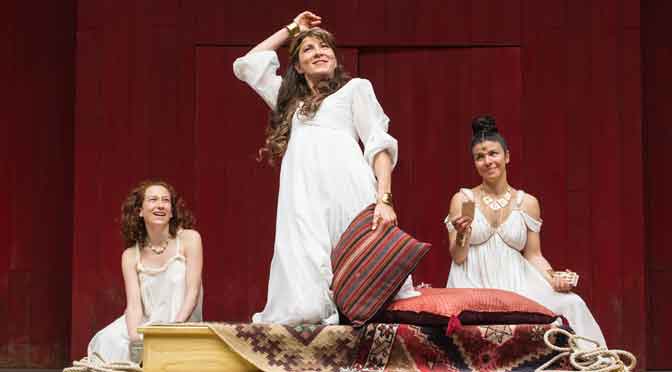 Eve Best has made a triumphant return to Shakespeare’s Globe. Following her fine directorial debut in 2013, she now takes the lead in Antony and Cleopatra. This accessible production, directed by Jonathan Munby, tells Shakespeare’s tale of love and war with the utmost clarity.

A pirate queen, full of fight, with a wicked sense of humour, Best’s Cleopatra displays the character’s fabled “infinite variety” and knows how to play the crowd in all moods. She is joined by Clive Wood, who makes the perfect “old ruffian” Antony, giving a studied performance that’s crafted to fill you with unease – he’s both too much the politician and too passionate to trust, degenerating into little more than a bully.

The air of luxury Munby establishes makes for a slow start, and the production has moments that might be speedier. Much time, for example, is given to Phil Daniels’ Enobarbus, though it has to be admitted he gives a remarkably subtle performance. The battle scenes are handled efficiently, though, and transitions between scenes, with characters overlapping each other, create some intriguing resonances.

There’s some great use of music and the humour in the text is sustained throughout. Several smaller roles are given their due, creating a world that feels populous and convincing. Jolyon Coy stands out as the “boy Caesar” and Sirine Saba works hard as Cleopatra’s attendant. The finale is testament to how captivating Best’s performance becomes, particularly in her poignant appeals to the women in the audience.

All this for a production dogged by troubles. Christopher Saul is a last-minute substitute who bravely performed with the text last night. Wood has been ill, missing several preview shows, while Best sports a bandaged ankle. But I couldn’t see their performances marred in the slightest. Let’s be thankful for the old adage that the show must go on. This is an evening full of affirmation for the theatre generally and this cast in particular, with a show that, like its star, is “a wonderful piece of work”.