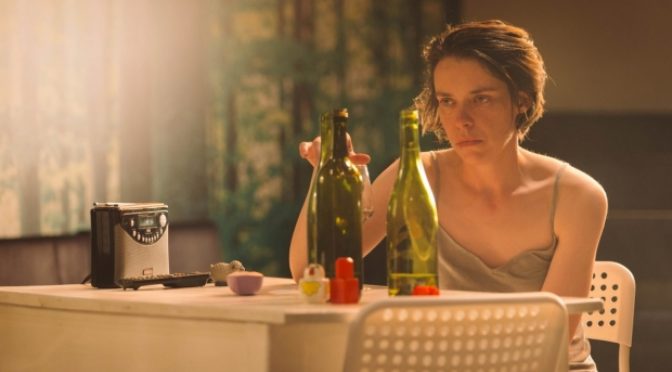 Theatre can never have enough thrillers for my liking so playwright Christopher Adams’ trip into my favourite genre is welcome. Setting his murder mystery amidst the sleazy ‘chem sex’ scene makes it topical. Touching themes of addiction and ageism make it serious. And movement director Natasha Harrison’s work should please a theatre crowd. But at heart Tumulus is a good thriller; with a solid plot, that unfolds nicely, and satisfying twists and turns, it makes for a hugely entertaining hour.

Let’s not knock the show’s arty touches. Sound effects are mostly provided by the cast – radio drama style – while minimal props are moved around balletically. It all adds atmosphere, by turns appropriately noirish and drug induced, as well as giving the cast a chance to shine. And director Matt Steinberg never allows the powerful sound and lighting design (from Christopher Nairne and Nick Manning respectively) to overwhelm the story. A dead body has been found on Hampstead Heath, dismissed by all as an overdose – part of an epidemic affecting young gay men – but the victim’s kind-of-boyfriend, Anthony, has his suspicions.

The clever twist lies with our unusual amateur detective who drives the show with his narration. Anthony, played with vigour and intelligence by Ciarán Owens, has demons and flaws as all sleuthing heroes must and they are depicted viscerally here. Addicted to drugs, slowly realizing how much the young man he was occasionally seeing meant to him, hallucinations are the instigation to his investigation. Ghostly visitations add a spooky edge to the show, made effective by the performance from Harry Lister Smith. He plays the ghost of the first victim, another former partner of Antony’s and a further young man in danger, flipping roles with consummate skill. The same technique, and ability, is seen with Ian Hallard’s performance of even more characters as he jumps between being a therapist, different party guests and even a dog walker who found the body. Hallard distinguishes each role carefully and makes the whole thing look effortless thereby aiding Steinberg’s success in keeping the whole show tight and speedy.

There’s still more to praise as Tumulus is also a funny play. Humour and suspense are a tricky combination and Adams does falter at times with a little too much repetition and a search for lyricism he doesn’t quite master. But with keen observations the laughs focusing on London life, which nicely root the action in time and place, are impressive. Hallard has some lovely comic touches and Owens a wryness around his character’s pretentions that adds depth. This take on the gumshoe anti-hero is compulsive stuff with careful nods to tradition that prove witty as well as aiding tension. Adams has a thorough knowledge of the genre – that includes the necessity for novelty – and he delivers. On all counts Tumulus adds up a great show.