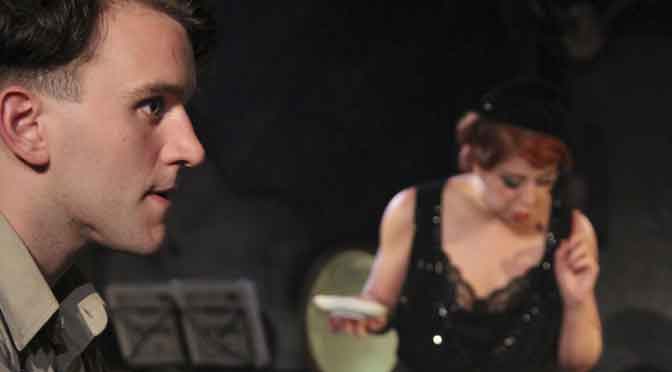 It’s hard for a critic to consider I Am a Camera without recalling American reviewer Walter Kerr’s brickbat one-liner, “me no Leica”. Indeed, John Van Druten’s 1951 play, based on Christopher Isherwood’s Goodbye to Berlin, is an undeveloped affair. It doesn’t help that the story went on to become Cabaret, as comparisons are inevitable and this script is a long way from anything divine or decadent. All the more credit, then, to director Anthony Lau and his cast who make this evening at the Southwark Playhouse such great entertainment.

Van Druten’s text is dated – there is barely a nod to Isherwood’s homosexuality, nor any real sense of Nazi threat. The supporting roles are also weak, although Joanne Howarth’s landlady, Fraulein Schneider, is an intriguing, developed presence. Lau’s focus, therefore, is on our heroes: the narrator Isherwood, struggling with “obscene laziness” in rented rooms, and the “young and savvy” Sally Bowles. Their relationship, a marriage of sorts that almost becomes the real thing, is touching and tremendous fun.

Van Druten’s Isherwood isn’t an entirely likeable character. He is petulant and pretentious, and Harry Melling plays him with an engaging intensity. But it’s when Sally Bowles, portrayed by Rebecca Humphries, is on stage that things really take off. Melling and Humphries create a chemical formula not to be missed. Humphries is a natural comedienne with a deadpan delivery, keeping the audience on its toes as she dips between spoilt child and worldly sage. More opera diva than cabaret artist, her Sally Bowles is the star of the show.

Written 7 September 2012 for The London Magazine