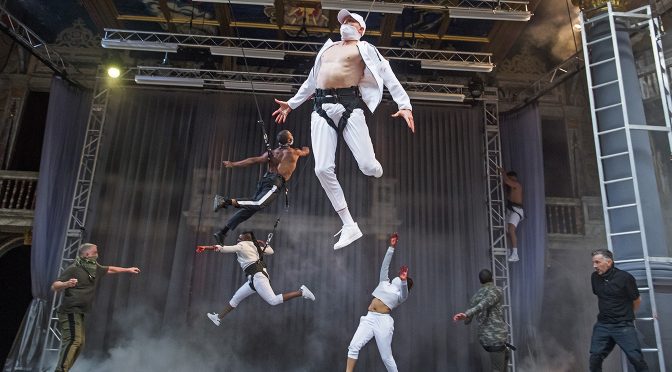 Matthew Dunster’s new production of Shakespeare’s Cymbeline is bravely “renamed and reclaimed”. Focusing on the female lead – after all, she has the majority of the lines – is enlightening and provides a star role for Maddy Hill that she proves commanding in. This new take on Shakespeare fits well with artistic director Emma Rice’s vision for the Globe.

Praise first: Dunter’s ability to tell the story is superb. Cymbeline has a complicated plot with plenty of disguises but this production is a model of clarity. The idea of updating the play, with contemporary gang culture and the drug trade is good. The use of voiceovers is inspired. Likewise, casting a deaf actor (William Grint), signing his role as one of Imogen’s long-lost brothers, brings out raw emotions marvellously. There’s a declaratory style that some performers struggle with, and ironically feels old fashioned, but the physicality of this show is commendable.

The biggest coup comes from the work of designer Jon Bausor and choreographer Christopher Akrill. Bausor uses a giant plastic curtain and strip lights to set the scene. Purists won’t like the fact that the theatre’s charm isn’t taken into account, but the cinematic feel of the design is visually arresting and in keeping with the whole. Akrill’s dance adds poetic moments and makes the fight scenes stunning, so much so that bursts of aerial acrobatics seem unnecessary.

But while it all looks great, there’s a flaw here. Cymbeline is a notoriously difficult play, with a plot defying credulity and a final scene so full of revelations it is difficult not to laugh. Unfortunately, Dunster seems determined to play the whole thing for comedy.

Attempts to reflect the violence of this society are unsuccessful. Only Jonathan McGuinness in the title role manages to be frightening. The rest of the cast are hampered by too many interjections just for laughs. Matthew Needham’s Giacomo is a case in point; the disturbing scene where he spies on Imogen in bed becomes a lark. Suffering most is Cloten, played with conviction by Joshua Lacey: the role is reduced to a strutting cock (yes, we get the joke) and a character that should be terrifying becomes a lame joke.

Time after time humour deflates tension, leaving the text flat. There seems little faith in the play’s power to move an audience and the outcome is monotone if not monotonous. Dunster plays out his strategy boldly – credit to him – I just happen to disagree with it.