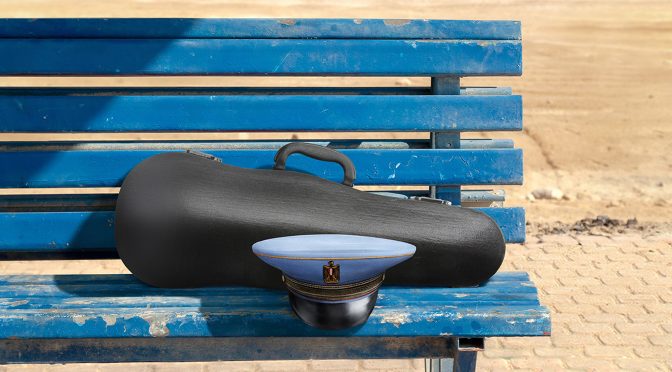 A big production in a small space is one way to get a buzz. This Broadway hit, by David Yazbek and Itamar Moses, has a huge cast considering the venue: there are the titular musicians, on tour from Egypt, and those they unwittingly encounter, the locals of a nowhere-town in Israel. But it’s the committed low-key tone – the claim from the beginning that what we are about to see is not very important – that makes the show stand out.

The visiting musicians get involved in some heavy stuff, offering advice on life and love, with romances beginning, or not, and ending… maybe. And there’s a lot of consideration as to how important music can be – transforming lives and bringing people together. But Moses’ book has a consciously slow pace, which director Michael Longhurst embraces. The action is deliberately minimal: characters visit a park, go on a date, and wait for a phone. The show becomes a triumph of restraint and modesty.

The music and lyrics by Yazbek are often quiet too – there’s no search for a show-stopping number, although the songs are fantastic, and the score deserves its Tony Award (one of six!). A fascinating mix of the Middle Eastern with Western influences, it’s exciting to hear a musical that sounds so different. The sentimental songs are excellent – stand-alone hits – and Yazbek has a gift for comedy too.

Although a true ensemble piece, Miri Mesika shows she’s a star in the role of café owner Dina. With a great voice and sure command of the comedy in the piece, Mesika makes her character believable and admirable. The connection between Dina and the band’s conservative conductor proves fascinating through the chemistry between Mesika and Alon Moni Aboutboul. It is striking that the focus for the show is middle life, both characters have a history and share a sense of calm resignation.

There are also strong performances from a married couple in trouble, played by Marc Antolin and Michal Horowicz, with a role for Peter Polycarpou as her character’s father providing a perspective from later in life. And given two fantastic numbers, it’s impossible to ignore Harel Glazer and Ashley Margolis as younger men starting their romantic lives.

It is clear that Yazbek and Moses have more ambition for the piece than their tone suggests – the ages of characters show that much. There is a sanguine approach that gives the work a distinct flavour, with beauty in everyday things that has tremendous charm. Hope is the big theme in the end – past and future. The Band’s Visit searches out hope at all stages of life and turns out to be, well, important, after all.