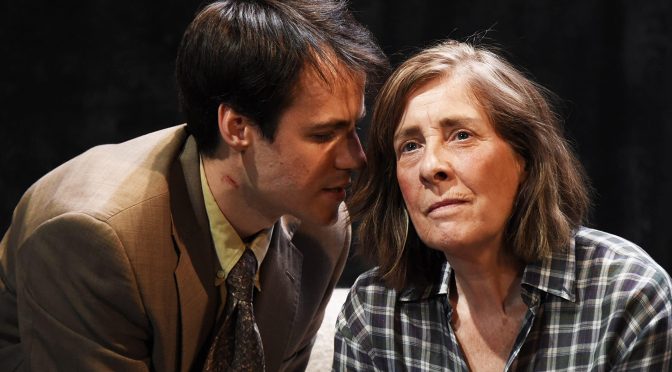 Everybody loves the work of Patricia Highsmith, or at least they should. Joanna Murray-Smith’s play proves great fun imagining the great writer in old age, battling with her agent over a final novel starring her greatest creation, Tom Ripley. Connections between the charismatic villain on the run and two characters pinned down in a Swiss chalet make for an accomplished play that tries too hard at times, but is entertaining and worth catching.

It’s possible to be harsh about the piece. Given that it’s about a thriller writer, it’s too far away from gripping. A will-he-won’t-he-stay scenario for her publisher’s emissary, as Highsmith keeps trying to kick him out, becomes cloying. Even a fixation on weapons doesn’t add enough tension. Rather, the play’s strength is its comedy, and the elderly author gets some great lines full of barbed wit and wicked wisdom.

Switzerland is impeccably directed by Lucy Bailey, although she fails to inject a sense of threat. And it’s well-performed by Phyllis Logan and Calum Finlay. Murray-Smith warns about the danger of “over-playing” and both performers heed her advice, handling the occasionally flat characters and contrived scenario superbly.

The play overreaches with an ill-prepared headscratcher of a finale that comes too close to just plumping up the running time and inviting after-show discussion. The coda-like end feels unnecessary, and detracts from a considerable achievement. Taking us into the mind of Highsmith,extrapolating what the recluse might have been like, proves fascinating. Using biography and the writer’s oeuvre as a springboard for plenty of juicy ideas shows Murray-Smith’s talent and saves the play.