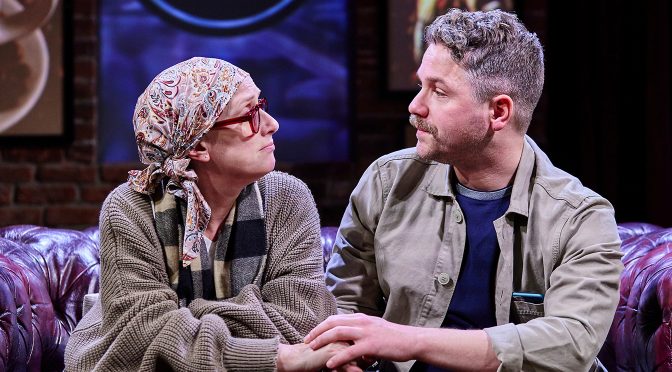 The European première of this neat comedy drama is a sensible bet for a new venue. Mark Gerrard’s play is a solid affair, Andrew Keates’ direction is sure-footed, and the cast is a dream. With the refurbished Actors Centre looking swanky, and exciting forthcoming productions announced (don’t miss Foxes), the Seven Dials Playhouse is off to a great start.

Steve has the eponymous character’s marriage, to Steven, under pressure, not least because of their young son Stevie. Their best friends are either starting a new life as a ménage à trois or sick. If this mid-life trauma is sadly predictable, Gerrard handles the tropes… by adding show tunes. And we all know, musical theatre improves everything.

To be clear, nobody actually sings. But Steve and his circle are obsessed with Broadway shows and the work of Stephen Sondheim in particular. No matter what – infidelity, parenthood, sex, death, and friendship – there’s a Sondheim song to quote. And there’s musical accompaniment from a pianist to suggest, to those in the know, what might be coming next.

When it comes to the humour, it helps to have a working knowledge of Sondheim’s work. I’m such a fan I’ve seen Do I Hear A Waltz? so I thought it was all hilarious. But with so many references to Into the Woods and Company there is a danger some of the jokes are obscure. That said, my favourite line was a reference to the Géricault painting, with Steve describing his group’s fading sexual attraction akin to a gay Raft of the Medusa. With the help of confident comedy skills from the cast, Gerrard’s wit should entertain all.

It helps that Steve is appealing, aided by a sterling performance from David Ames. Even the character’s moaning is entertaining. But the central relationship needs work in the script as well as in the play. Joe Aaron Reid plays the husband and does well in a horrible scene where he is juggling phone calls on his own. But we need to know this character better.

For heart the play relies on friendship. Most notably with Carrie, dying of cancer yet still very much alive: full of intelligence, integrity and humour. Taking the role, Jenna Russell shows why she is an actress to never miss – each scene she is in is lifted immeasurably. There are many reasons to see the show, but it’s Russell that makes Steve unmissable.