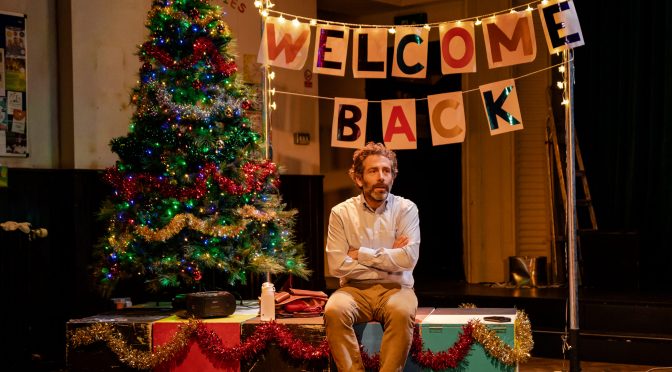 Even if you think Christmas plays aren’t for you, Mike Bartlett might change your mind. Here’s a show that, thankfully, doesn’t expect us to switch off our brains during December. And in this look at contemporary family life there’s not a trace of the nostalgia that consumes the festive season. At the same time, Snowflake ends a long way from doom and division: Bartlett gives us a heart-warming and clear lesson that’s feelgood enough to teach any Scrooge.

Starting with a 40-minute monologue from Elliot Levey, as Andy waiting to see his daughter for the first time in three years, the first pleasure here is a brilliant performance. And maybe a cheeky streak? How much is Bartlett playing with the fact that this middle-aged, middle-class man – given such a massive role – is just the person we hear too much from in the theatre?

Depending on your age, you might find Andy patronising to the point of being insufferable…or maybe just lame. At first the generation gap is gently prodded; the humour is pretty standard. But there’s real pain behind the Dad jokes. Andy doesn’t know why he is estranged from his daughter Maya. He is still grieving for his wife. And he feels his age, comparing himself to an Anglo-Saxon dummy on display at his local museum. Bartlett’s skill is to give us a midlife crisis that’s interesting (for once) and Levey does a brilliant job with it.

It’s pretty obvious that a confrontation with Andy’s daughter will occur. But Bartlett handles this well, too, and I wouldn’t want to spoil the surprise. Suffice to say that, with the aid of Clare Lizzimore’s sure-handed direction, not one but two younger voices get to be heard. Amber James’ character, Natalie, provides a welcome, energising hit, bringing fine challenges to Andy’s views and more humour to the piece. Ellen Robertson takes the part of Maya. Of course, in reference to that distasteful description of the millennial generation, she is the snowflake of the title – but Robertson makes Maya a formidable character and effectively ups the emotional stakes.

Again and again, Bartlett predicts the different responses his audience might have, twisting arguments and emotions to answer prejudices and predispositions. The result is a play with an agility that’s in keeping with the message that we all need to take more time to listen to one another better. And that maybe now is the time of year to do so. If that sounds pat, then clearly you really don’t like Christmas, let alone Christmas plays. Admittedly, there’s a sentimental streak to the show. But, since it’s partly Bartlett’s point that the season of good will should be extended to all – even those who voted for Brexit – it’s only fair to make allowances for a writer with Yuletide in mind.