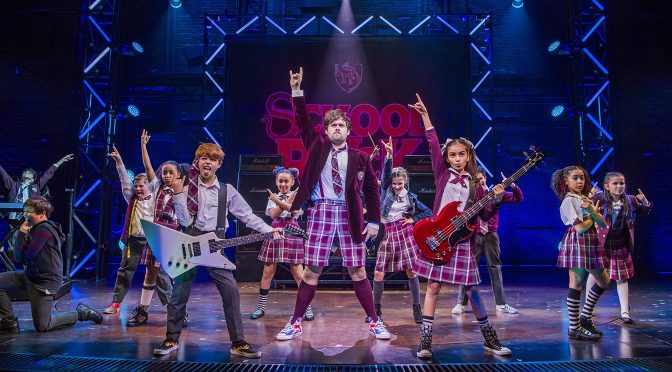 Since Matilda’s triumph, anyone putting kids on stage has more than ever to live up to. Even with credentials as impeccable as Andrew Lloyd Webber’s, this film adaptation can’t be called the best thing in the West End. The fact that it is so predictable probably doesn’t matter – many like to see a movie on stage – and with some good songs added, one of which is still buzzing around in my head, this is a crowd-pleasing show.

It’s the story of a wannabe rock star, David Fynn, fraudulently becoming a teacher in a posh school. Too ‘hardcore’ to bother with ‘gold stars’, his attitude endears him to the privileged but ignored pupils and sets him in conflict with their parents. Recognising “soul brothers and sisters” in the children, he takes them to compete in a Battle of the Bands, fulfilling his dreams and engendering new ambitions in them. And there’s your structure. I can’t imagine Julian Fellowes, credited with the book, broke into much of a sweat, unless stubbornly refusing twists or complexity is difficult for him.

Dewey Finn takes the lead and is amiable, busy and charismatic. With the best will in the world, though, you can’t say the role belongs to anyone other than Jack Black who made the film a hit. The other adult roles are disappointingly flat. School of Rock tries too hard to get the kids on side for my taste, and parents get too rough a ride, but pandering to the young audience makes commercial sense and is done well. The children in the cast cannot fail to impress with their talent and energy, creating a palpable excitement. This pedagogical introduction to musical theatre, a well-trodden path for Lloyd Webber, is hard to dislike, but there’s little here for grown ups.